Justice Oyefeso of the Lagos State High Court, Ikeja has adjourned the re-arraignment of Fred Ajudua till 12th January, 2017. 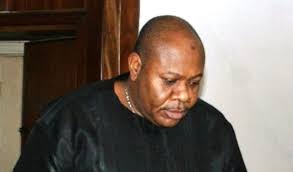 At the resumed hearing on 14th November, 2016 counsel to Ajudua, Alex Agbaka announced his appearance for the defendant. He informed the court that he only stumble on the matter today.

“My Lord, I try to contact the defendant sister ‘Gina Osuala’ and the news got to me that the defendant was hospitalized at the National Hospital Abuja”.

He urged the court to adjourn the case to enable him study the file and also promised to produce the defendant at the next sitting.

“I will enter a personal undertaking that at the next date, I will produce the defendant” he said.

Ajudua was re-arraigned on 25th May, 2016 for an alleged fraud of $8.4m. This followed the transfer of his case from Justice Oluwatoyin Ipaye to Justice Kudirat Jose of the Lagos State High Court in Ikeja.

He was accused of duping the complainant, a former Chief of Army Staff, Lt Col. Ishaya Bamaiyi, of the sum $8.4m sometime in 2004 at Kirikiri Prisons in Lagos.

Justice Lateef Lawal-Akapo of the same court had last year convicted a court registrar, Mrs. Oluronke Rosulu, who was accused of helping Ajudua in perpetrating the fraud and sentenced her to 10 years imprisonment.