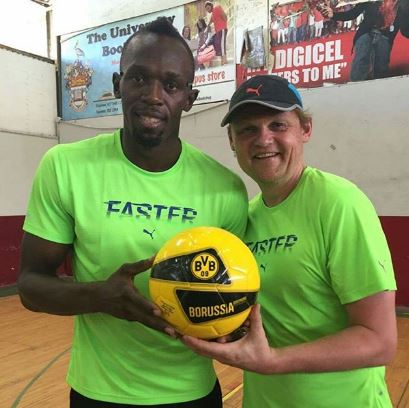 Borussia Dortmund’s chief executive has confirmed that the nine-times Olympic sprint champion Usain Bolt will train with the Bundesliga team.

Hans-Joachim Watzke told newsmen on Sunday that “it was no joke” and “not a marketing move”.

Bolt, 30, revealed this news in an interview in which he also reiterated his hope to play for Manchester United, the team he supports.

“We’ve decided this some time ago,” Watzke told Sport Bild. “Puma CEO Bjorn Gulden, who is a member of our board, has told us that Usain is highly interested in practising with us. For us that’s no problem. Our coach Thomas Tuchel likes the idea as well.

“Asked if Bolt could have a future in Dortmund, Watzke replied: “We don’t even need to talk about it.”

The German sportswear company, Puma, had already designed a pair of boots for Bolt to wear as he looks to make a switch to football.

Puma tweeted a picture of the boots, which are coloured orange and white with a Jamaican flag and his name “Bolt” written on them.