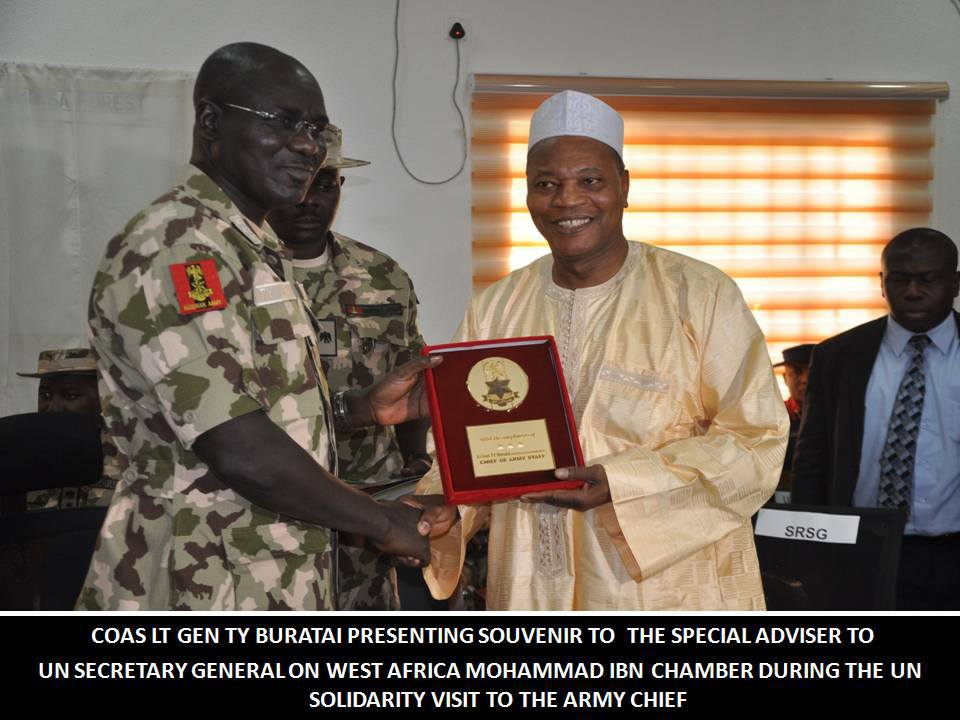 Col. M. A. Anka, Abuja: The United Nations Organization (UNO) has commended the Nigerian Army for being professional in handling Boko Haram terrorism and insurgency especially in the North East Nigeria, saying their conduct was exemplary and it is in line with international best practices.

The Special Assistant to United Nations Secretary General (SRSG), Office for West Africa, His Excellency, (Doctor) Mohammad Ibn Chambas gave this commendation during the UN solidarity visit to the Chief of Army Staff Nigerian Army, Lieutenant General Tukur Yusufu Buratai in his office, at the Headquarters of the Theatre Command of Operation LAFIYA DOLE in Maimalari Cantonment, Maiduguri, Borno State.

The SRSG said that the UN has been explicit and consistent in condemning the activities of the Boko Haram terrorists in the region. He went further to commend Nigeria’s neighbouring countries for collaborating with Nigeria in fighting the common terrorists. He said the UN was conscious of the hardship caused to the people of Nigeria as a result of the activities of the BHT and promised the United Nations readiness in collaboration with other Non-governmental organizations (NGOs) to bring succour to the affected persons. 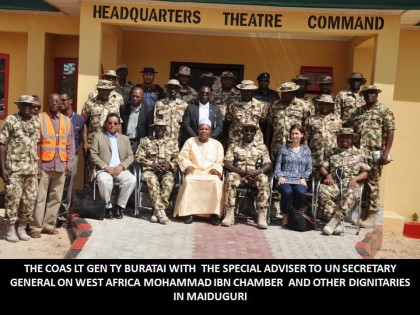 Mr Mohammad also extended his appreciation to the Borno State Government, National Emergency Agency (NEMA), State Emergency Agency (SEMA) and other Humanitarian Agencies in providing succour for the Internally Displaced Persons (IDPs) in the North East saying the UNO will do everything possible to support, rehabilitate and resettle the victims of this menace. He also used the opportunity of the visit to pay tribute to Nigerian military personnel that lost their lives in the cause of the conflict, describing them as heroes, whom he said paid the supreme prize for others to live.

In his response, the Chief of Army Staff, thanked the UN chief for the visit, kind commendation and promise of continuous support to the fight against Boko Haram terrorists in Nigeria. He also thanked the world body for all the support given to the Multinational Joint Task Force (MNJTF) especially at the formation stage of the Task Force when he was the pioneer Force Commander, saying that the MNJTF has achieved a lot in the fight against terrorism, which he attributed to the solid foundation at its take off.

The Chief of Army Staff promised to continue to lead the Nigerian Army until the terrorists surrendered to the Federal Government of Nigeria.

Mr Chambas was accompanied on the visit by some top diplomats of the United Nations.