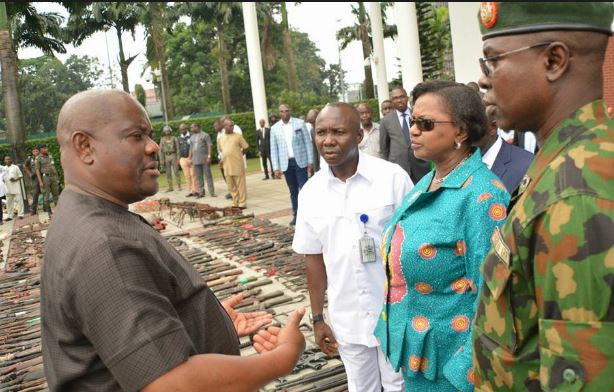 The Rivers State Governor Nyesom Wike has placed a ban on vigilante groups across the state as part of the State amnesty committee that submitted it’s report to the governor in Port Harcourt.

The Committee was set up in September to rid the state of cultism. Speaking after the committee submitted its report to the governor, Wike said that the time for amnesty has elapsed and that window for repentance for cultists and criminal elements was over.

The rivers state governor ordered security agencies to go after any criminal persons or groups in the state who have refused to repent.

Wike said that groups seeking to form vigilante groups should endeavor to seek permission and register with the rivers state government.

“That you and I can sleep very well today is worth commending.

“I direct security agencies to go after those that have refused to surrender their weapons because the time for amnesty is over. We should not politicise crime or say that it is a party matter.” He said.

The Chairman of the Rivers State Amnesty Programme, Kenneth Chinda gave the submission to the governor at the government house on Tuesday, which concluded the programme.