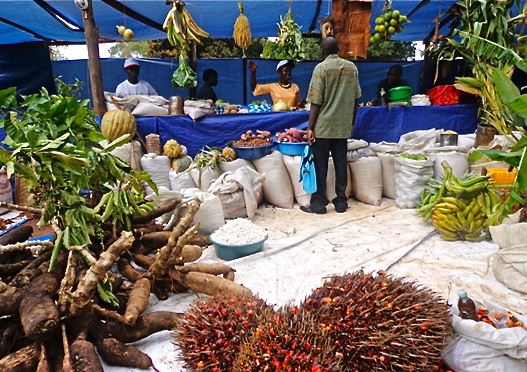 Slight Growth Witness In Non Oil Sector of The Economy

National Bureau of Statistics, NBS, has released the third Quarter GDP figures of the Nigerian economy.

The report reveals a consistent growth in Agric and Solid Mineral sectors, indicating the success of the Buhari administration’s economic policies even though overall economy is still in recession.

This is disclosed in a statement made available to the press by the Senior Special Assistant on Media & Publicity to the Vice President, Laolu Akande on Monday in Abuja.

The over-riding impact of the oil and gas sector, where vandalism and sabotage of critical installations negatively affected production output, explains the persistence of the recession, as the non-oil economy posted a very slight growth.

Efforts to resolve the Niger Delta situation are however continuing as the Federal Government has opened several channels of communication with all relevant groups in the Niger Delta. Also, urgent fiscal and monetary measures to spur the economy back to overall positive territory are certainly in the offing including those targeting manufacturing.

In respect to the NBS reports, the Special Adviser to the President on Economic Matters, Dr. Adeyemi Dipeolu, made the following statement on behalf of the Economic Management Team:

“The third quarter results just released by the National Bureau of Statistics show that the Nigerian economy is still in recession. Growth in Gross Domestic Product fell by -2.24% in the third quarter as compared to the decline of -2.07% experienced in the second quarter.

The slight deterioration in national economic performance owes largely to the continued poor performance of the oil and gas sector which worsened to -22.01% in the third quarter as compared to -17.48% in the second quarter of 2016.  The immediate cause of this, as is now generally recognised, is the steep decline in oil and gas production in the third quarter of 2016 due to acts of vandalism and sabotage of oil export facilities.

Remote causes include the continued out-sized influence of the oil and gas sector on the rest of the economy as typified by its contribution to government revenue and foreign exchange earnings, which continue to be important motors of economic activity.  Moreover, due to time lags, it is still too early for policy interventions of the Federal Government to begin to impact fully on economic activity.

There are however some ‘green shoots’ of economic recovery beginning to emerge.

To start with, on-going consultations to bring lasting peace to the Niger Delta have enabled an increase in oil and gas production which if sustained at current prices, will bring a measure of relief to the economy.

Other key sectors of the economy showed encouraging signs of improvement.

The growth in the non-oil economy although still weak at 0.03% showed a return to positive territory after two consecutive quarters of negative growth.

This was partly due to the continued good performance of agriculture and the solid minerals, two sectors prioritised by the Federal Government.  Agriculture grew by 4.54% in the quarter under consideration of which growth in crop production at nearly 5% was at its highest since the first quarter of 2014.  Growth in the solid mineral sector averaged about 7%.

The financial sector rebounded quite strongly in the period under review growing by 2.85% from a negative growth of -13.24% in the second quarter.

The performance of the manufacturing sector continued to be of concern given its key role in value addition and job creation in the economy.

It is expected however that with greater local sourcing of raw materials, expected improvements in infrastructure, especially power and reductions in the cost of doing business, this sector will soon experience a sustained improvement in its contribution to the national economy.

Similarly, while inflation is still high at 18.3% on a year-on-year basis it has begun to level out on a month-on-month basis and should enable the deployment of more policy tools to support growth and employment. Indeed, growth of headline inflation slowed down appreciably from 13.8% in May to as low as 1.70% in September.

The year to date growth is about -1.58% and is set to improve given some of the points mentioned earlier especially regarding agriculture, oil and gas, and power supply.  In addition, there have also been reductions in the rate of contraction of household and government consumption expenditure.  Household consumption expenditure fell for instance by -3.25% in the third quarter of 2016 as compared to -6.0% recorded in the second quarter.

The ratio of investment to GDP also showed a notable improvement rising by 7.6% in the third quarter of 2016 as compared to a contraction of -7.4% in the fourth quarter of 2015.

The Strategic Implementation Plan for the implementation of the 2016 Budget of Change prioritised capital expenditures for power, roads and rail as well as social investments.

In addition to creating jobs and promoting social inclusion, these expenditures will also provide a stimulus by putting money in the hands of people.

The usual economic activity that takes place in the Yuletide season will also likely have a positive impact on the wholesale and retail trade sector.

Overall therefore, it is expected that these factors which will be underpinned by the policies to be unveiled in the Economic Recovery and Growth Plan, ERGP, to be adopted before the end of the year, will lend further momentum to on-going efforts to revitalise and reposition the economy.”