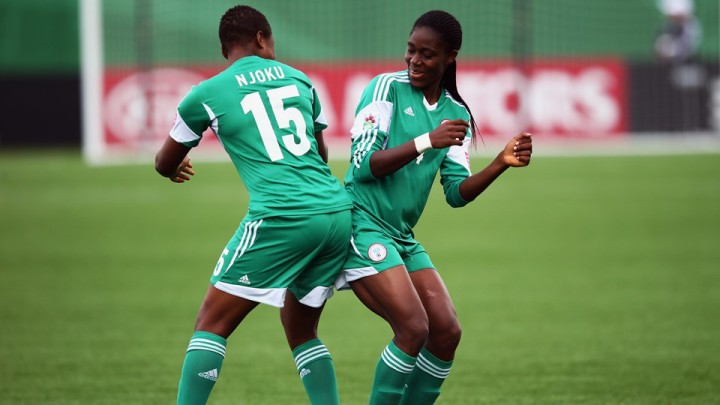 Arsenal Ladies forward Asisat Oshoala was the star of the show, scoring four goals and assisting one as reigning African Women’s Champions Nigeria started their AFCON title defense with a 6-0 thrashing of Mali in Limbe on Sunday evening.

The ice cool Super Falcons dominated the match from start to finish and were rewarded for their persistence. A win for the Falcons against Ghana in their next match will guarantee them a spot in the semi-finals.

After a fiery start in the opening 20 minutes where Nigeria created chance after chance, Francisca Ordega opened the scoring in the 21st minute with a calm finish into the far post from an Oshoala cut back. Nigeria had been knocking with the same movement throughout the opening exchanges.

The closest they had come was on the quarter hour mark when Halimatu Ayinde and Ordega missed to finish at the edge of the six-yard box from an Oshoala cut back.

Ayinde came close to atoning for her earlier miss in the 25th minute but her left-footed shot after a darting run into the box rolled over the crossbar.

Nigeria were comfortable and passed the ball around with ease, looking for the perfect opportunity to strike for a second. Five minutes to the break, Oshoala scored her first, taking one touch off the keeper and calmly slotting home from an Ordega pass.

Uchechi Sunday should have made it 3-0 three minutes later but she took one too many touches inside the box allowing the defense to block the eventual shot.

Oshoala also had a chance at the stroke of halftime, getting off her marker with a great first touch from a Rita Chikwelu pass but the keeper stuck a foot out to block the shot for a corner.

The defending champions though picked up in same gear in the second half and a minute from the restart, Sunday registered her name on the score-sheet from the penalty spot after Oshoala was brought down.

The midfielder had a chance for a second seven minutes later but her shot from inside the box after a one-two interchange of passes with Chikwelu was smothered by the Malian keeper Goundo Samake for a fruitless corner.

Ten minutes later though, the Nigerians made it 4-0 with Oshoala completing another calm finish after picking up a flicked ball from Wogu Chioma who had just spent two minutes in the pitch.

On the other end, Mali came close to a consolation after a swiftly executed counter attack in the 68thminute but Bintou Koite’s shot rolled across the face of goal. Immediately on the turn, Nigeria made it 5-0.

It was the North Londoner Oshoala again with another great finish into the top right corner and she finished the job 14 minutes from time with a low shot from a Chikwelu pass.

Conceding the sixth goal deflated the Malians whose flame completely died out and even the faintest of hopes to get a consolation dwindled out like a candle flame.