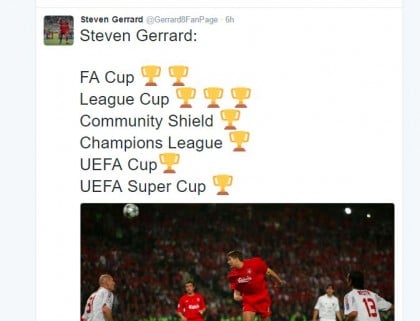 Steven  Gerrard,  (born 30 May 1980) is a retired English professional footballer who played as a central midfielder. He spent the majority of his career playing for Premier League club Liverpool, with most of that time as their captain.

Gerrard spent 17 seasons at Anfield, making his Liverpool debut in 1998, cementing his place in the first team in 2000, and succeeding Sami Hyypiä as team captain in 2003. His honours include two FA Cups, three League Cups, one UEFA Champions League, one UEFA Cup, and one UEFA Super Cup. Gerrard scored Liverpool’s first goal and won the penalty kick for the third as Liverpool came from 3–0 down to defeat Milan in the 2005 Champions League Final.[3] He joined Major League Soccer club LA Galaxy in July 2015, spending one-and-a-half seasons there before retiring on 24 November 2016. 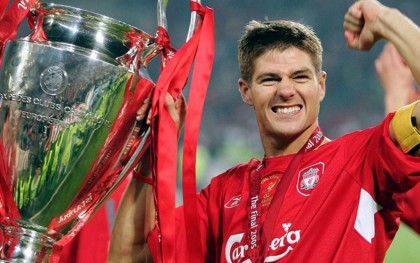 Gerrard made his international debut for the England national football team in 2000, and represented his country at the 2000, 2004and 2012 UEFA European Football Championships, as well as the 2006, 2010 and 2014 FIFA World Cups – captaining the team at the latter two tournaments.He was named as the permanent England captain shortly before UEFA Euro 2012, where he was named in the UEFA Team of the Tournament. Gerrard became the sixth player to win 100 caps for England in 2012, and is currently third in the country’s all-time appearance list. He ended his international career in July 2014, having won 114 caps.