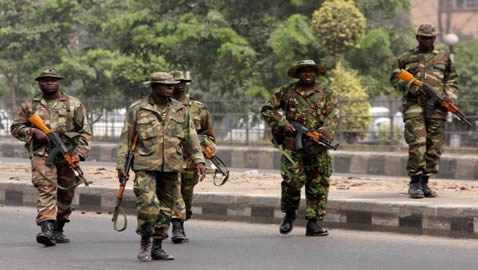 Amnesty International’s Planned Campaign of Calumny Against The Nigerian Army

SK Usman, Abuja: The attention of the Nigerian Army has been drawn to a planned release of a report by Amnesty International on an unfounded storyline of mass killings of MASSOB/IPOB protesters by the military between August 2015 and August 2016. We wish to debunk the insinuation that our troops perpetrated the killing of defenseless agitators. This is an outright attempt to tarnish the reputation of the security forces in general and the Nigerian Army in particular, for whatever inexplicable parochial reasons.

For umpteenth times, the Nigerian Army has informed the public about the heinous intent of this Non-Governmental Organisation which is never relenting in dabbling into our national security in manners that obliterate objectivity, fairness and simple logic.

The evidence of MASSOB/IPOB violent secessionist agitations is widely known across the national and international domains. Their modus operandi has continued to relish violence that threatens national security. Indeed between August 2015 and August 2016, the groups’ violent protests have manifested unimaginable atrocities to unhinge the reign of peace, security and stability in several parts of the South East Nigeria.

A number of persons from the settler communities that hailed from other parts of the Country were selected for attack, killed and burnt. Such reign of hate, terror and ethno-religious controversies that portend grave consequences for national security have been averted severally through the responsiveness of the Nigerian Army and members of the security agencies.

These security agencies are always targeted for attack by the MASSOB/IPOB instruments of barbarism and cruelty. For instance, in the protests of 30 – 31 May 2016, more than 5 personnel of the Nigeria Police were killed, while several soldiers were wounded, Nigeria Police vehicles were burnt down same as several others of the Nigerian Army that were vandalized. The strategic Niger Bridge at Onitsha came under threat thus leading to disruption of socio-economic activities.

In the aftermath of the encounter that ensued between security agencies and MASSOB/IPOB militants many of own troops sustained varying degrees of injury. In addition, the MASSOB/IPOB recurrent use of firearms, crude weapons as well as other cocktails such as acid and dynamites to cause mayhem remain a huge security threat across the Region.

In these circumstances, the Nigerian Army under its constitutional mandates for Military Aid to Civil Authority (MACA) and Military Aid to Civil Powers (MACP) has continued to act responsively in synergy with other security agencies to de-escalate the series of MASSOB/IPOB violent protests.

Instructively, the military and other security agencies exercised maximum restraints despite the flurry of provocative and unjustifiable violence, which MASSOB/IPOB perpetrated. The adherence to Rules of Engagement by the military has been sacrosanct in all of these incidents.

However, it is rather unfortunate for the Amnesty International to allow itself to be lured into this cheap and unpopular venture that aims to discredit the undeniable professionalism as well as responsiveness of the Nigerian Army in the discharge of its constitutional roles.