Wilson Ujuwaren, Abuja: The acting chairman of the Economic and Financial Crimes Commission, Ibrahim Magu, on Monday, November 28, 2016, visited the Chief of Air Staff, Air Vice Marshall Abubakar Sadique Baba to drum the message of anti-corruption in the military. 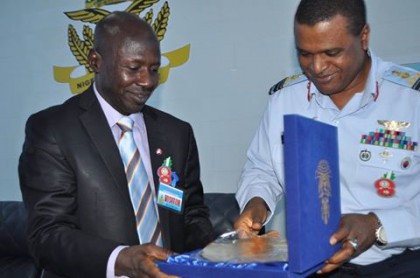 He specifically said anti-corruption fight should not be left for the EFCC alone as it is a crime against humanity and a threat to national security.

“Let us all tackle corruption, let us join hands together to kill corruption or at least reduce it to its barest minimum”, he said.

He appealed to the CAS to use his good office to mobilise women in uniform against corruption.

The Women Against Corruption campaign will be flagged off on December 7, 2016, at the International Conference Centre, Abuja at 9 am prompt.

It will also be recalled that the Chairman, Senate Committee on Financial Crimes and Anti- Corruption, Senator Chukwuka Utazi assured the staff of the Economic and Financial Crimes Commission, EFCC, of enhanced welfare and better-working conditions.

He gave this assurance on Friday while conducting on- the- spot assessments of the facilities and working environment of the South- South Zonal office of the EFCC in Port Harcourt, Rivers State. According to him, the works of the staff of the EFCC “are high- risk jobs that must be supported with incentives, facilities and the best of welfare conditions”. He particularly emphasised the re-introduction of the rested insurance scheme for every staff of the Commission and a “fully- functional housing scheme to ensure that the housing needs of staff” are met.

On the issue of training, Utazi, who was accompanied on the assessment tour by three other Senators, staff of his Committee and Journalists ,disclosed that though the Senate sympathized with the government on his embargo on foreign training for civil servants, it, nonetheless, made ” a special case for foreign training for staff of the EFCC and ICPC owing to the technical and sensitive nature of their jobs”. ” We will continue to insist that staff of anti- corruption agencies are trained and re-trained to ensure that they are intellectually empowered and updated on their assignments”, he said.