I have Found A Home At Chelsea – Victor Moses 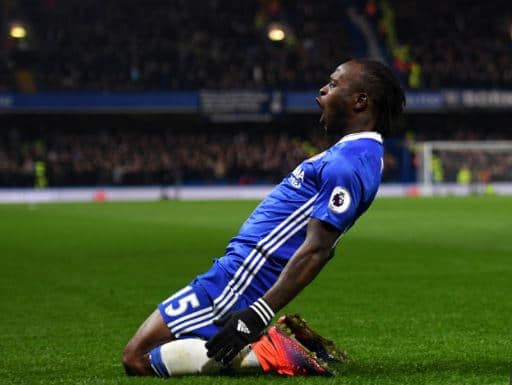 Chelsea winger and Nigerian International, Victor Moses said he has found home at Stamford Bridge. He said this after the match against the spurs which Chelsea won 2-1 to remain at the top of the table.

Chelsea came from behind to defeat their London rivals and secure a prompt return to the Premier League summit, with the rejuvenated Nigerian star.

Moses continued with his fine form this season with goal that gave the blues the winner against Tottenham.

The Blues made it seven straight wins in the Premier League and returned to first place after the Nigeria international completed their comeback to seal a 2-1 home win.

Christian Eriksen had earlier given Tottenham the lead with an excellent long-range strike, before Pedro equalised with a brilliant effort of his own.

According to goal.com reports, Moses has three league goals this season from his new right wing-back position, was delighted with another victory.

“I’m very pleased with the goal but the most important thing is the three points we got the day,” Moses said to Sky Sports.

“There was nothing we could do about the Spurs goal.

“Fortunately Pedro got a beautiful goal and we got ourselves back in the game. We are very pleased with the three points.

“I have definitely found a home here. Chelsea is my club and I’m pleased to be playing this season. The manager gave me the opportunity to express myself and I’m relishing it at the moment.

“I just want to keep on playing football and enjoying myself. We are very happy with the win.”

Pedro, meanwhile, hailed Chelsea’s confidence after they overcame adversity to come from behind.

“It was a very difficult game for us but we are very happy for the win,” said the Spain international.

“We continue to play in the right way. This is the way, game by game. There’s good feelings.
“The team now has a very good mentality, good stability and very high confidence. This is the most important thing.”

Moses represented England at under-16, under-17, under-19 and under-21 levels, but opted to play for Nigeria as opposed to being fully capped for England.

He has gained over 20 caps for Nigeria since his debut in 2012, and played in their winning campaign at the 2013 Africa Cup of Nations, as well as the 2014 FIFA World Cup.