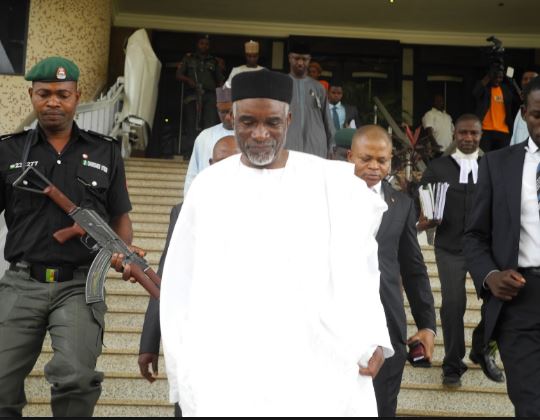 The Judge had earlier dismissed objections raised by the defendants to the admissibility of some documents presented as evidence against them, in a N29bn fraud case involving them.

According to a statement by the Head Media & Publicity of the EFCC, Wilson Uwujaren, said the defendants are facing a 37-count charge bordering on criminal conspiracy, stealing, abuse of office and money laundering, preferred against them by the Economic and Financial Crimes Commission, EFCC.

Baba, who is the Abuja regional manager of FSDH Merchant Bank (formerly First Security Discount House Limited), identified the bundle of documents, which included a covering letter, account opening forms, mandate cards, identity of signatories to the accounts, bank references for both companies, statement of accounts, certificate of identification, deposit confirmation slips, and letters of instruction from the customers.

But Ibrahim Isiyaku, counsel for Zulkifikk Abba and Towers Assets Management, who also held brief for Kanu Agabi, SAN, counsel for Nyako, his son and Serore Farms & Extension Limited, objected to the admissibility of some of the documents.

Identifying the sections of the evidence to include pages 16, 17, 18, 58, 59 and 90, Isiyaku raised objections to their admissibility noting that page 90 of the document, was “a communication between a certain BDC Limited and management of FSDH Merchant Bank, and had nothing in reference to any of the accused persons”.

He further argued that copies of driver’s license, international passport, and identity cards, tendered along with the evidence, which are the contents of pages 16 to 18, 58 and 59 “were certified by the Merchant Bank and not the public office that issued them, whereas they are public documents”.

Counsel for Abubakar Aliyu, Y.C. Maikyau, SAN, who held brief for O.A. Dada, counsel for Crust Energy Limited, along with other defence counsel, adopted the arguments of Isiyaku.

Aligning with him, Maikyau, also urged the court to reject page 37 of the evidence, arguing that “the page, showing the certificate of incorporation of Towers Assets Management was not certified by the appropriate authority”.

Though Jacobs noted that “I will not contest the objection to the admissibility of page 37”, he urged the court to dismiss the other objections.

He said: “What we seek to tender is the document used by the account holder to identify himself as the operator of the account; so it should go with the original document forwarding it to the EFCC, and cannot be severed”.

While orally applying to withdraw page 37 from the bundle of documents, Jacobs urged the court to dismiss the objection to admissibility of page 90, arguing that it was misplaced. According to him, “the argument that it had nothing in reference to any of the defendants was misplaced, because the witness gave testimony as to the investment made by the defendants with their instruction; so the letter of instruction cannot be said to be irrelevant in this case.”

Justice Abang, after listening to all the arguments, overruled the objection of the defence with regards to pages 16, 17, 18, 58 and 59.

While granting the prosecution’s application to withdraw page 37 from the bundle of documents, he said: “It is my humble view that once letter is admitted, the attached documents cannot be severed, and in this instance, the defence did not object to the letter covering the document, and the other documents are not tendered separately, and so the objection is overruled, as there was no objection to admissibility of the letter.”

In overruling the objection of the defence to admissibility of page 90 as part of the evidence, the trial judge, said: “The argument of the defence at this stage is premature, once a document is admitted, it is admissible in evidence, whether relevant or not will be at point of making submissions.”

The judge, thereafter, accepted the documents as exhibits against the defendants, marking them as B1 – B36, and B38 – B127.

Trial of Nyako and his co-defendants continues today, November 30, 2016.