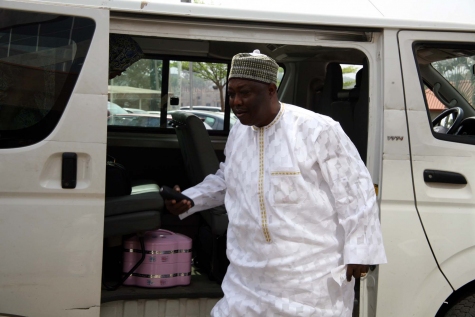 Wilson Ujuwaren, Abuja: The trial of Esai Dangabar, a former director, Police Pension Board and six others who are being prosecuted by the Economic and Financial Crimes Commission, EFCC, for their complicity in the infamous N24billion police pension scam resumed on November 29, 2016 with the prosecution presenting its fourth witness.

Gadanya told Justice Hussein Yusuf of the Federal Capital Territory, FCT, High Court, Maitama, Abuja, that Onyegbula honoured an invitation by the EFCC, during which she volunteered her statement on various dates within February 2012.

He told the court that afterwards, a search warrant was executed in her house No. 3 Andora Street Sun-City Abuja. According to Gadanya, “documents recovered include Ulover International Resources Limited account at Ecobank, HSBC priority payment document among others”.

Gadanya added that a second search warrant executed yielded several other documents among which were an agreement signed with Revita-Corp, a GTBank deposit slip, a Llyod bank statement of account. These were tendered and admitted by the court, marked Exhibits P37, P37A, P37B, P37C. The second search warrant was admitted as Exhibit P38.

However, Ernest Ikeji holding the brief of Lateef Fagbemi, SAN, objected when prosecution sought to tender the statement made by Onyegbula. He argued that the statements were not voluntarily obtained.

Citing section 29 of the Evidence Act, he claimed that the EFCC refused to admit Onyegbula to bail. Ikeji consequently asked for a trial within trial to receive evidence to what transpired in the interrogation room of the EFCC. The six other defendants in the matter all aligned with the position of Ikeji with counsel to Dangaba, Awomolo, SAN requesting a clearer copy of the statement from prosecution.

Justice Yusuf has adjourned to November 30, 2016 for commencement of trial within trial.