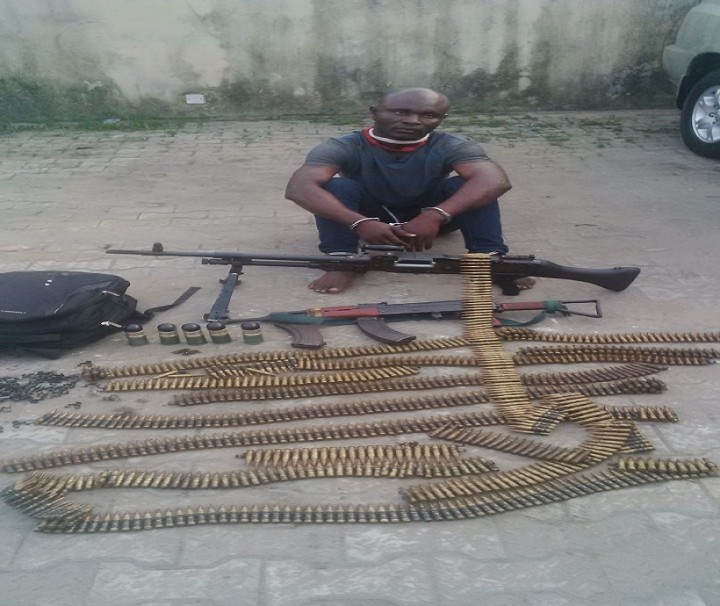 James Peter, one of the suspected kidnappers (Photo: NPF)

The Nigerian Police Force has intercepted and foiled an operation of a gang of kidnappers in Port Harcourt Rivers state.

“In continuation of targeted onslaught against crime and criminality throughout the country, the Inspector General of Police Intelligence Response Team (IRT) recorded a major breakthrough in Rivers and Bayelsa states.

READ: Ondo Election: Allowances For Officers Are Being Paid – IGP

“Acting on credible intelligence and public support, on the 29th of November, 2016, the IRT intercepted a four-man gang of heavily armed kidnappers, notorious for terrorizing the waterways and kidnapping in Rivers and Bayelsa states, along Azikiwe Road, Port Harcourt, Rivers State on their way for an operation

“A gun duel ensued, after which three of the kidnappers were fatally wounded while one James Peter ‘m’ aged 30 years from Southern Ijaw LGA of Bayelsa State was arrested.” He said.

According to him, the arrested member of the gang has since been cooperating with the police in their investigation by providing very valuable information on the membership of the gang and their modus of operation.

Weapons recovered from the kidnappers include one General Purpose Machine Gun (GPMG), one AK47 rifle, chains of GPMG ammunition and two fully loaded AK47 magazines. Efforts are in top gear to arrest fleeing members of the gang and recover their cache of arms.

Meanwhile, the Inspector-General of Police, IGP Ibrahim K. Idris, NPM, mni has once again enjoined Nigerians never to hesitate to provide the police with valuable information and assures them of renewed commitment on the part of the force in the fight against crime and antisocial behaviour.