Chief of Defence Staff General Gabriel Olonisakin has commended the operations of the Nigerian Navy in the Niger delta and north east. 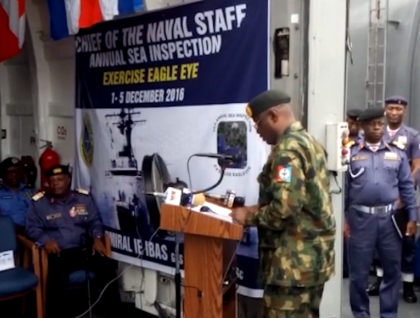 He gave the commendation while flagging off the second phase of the chief of naval staff sea inspection exercise code named exercise eagle eye.

Defence correspondent Isaac Nkuma who was on board NNS Centenary reports that General Olonisakin described the exercise as a demonstration of the navy’s commitment to constantly secure the territorial waters and make its presence felt in the gulf of guinea nothing that the floating navy barrack plat form introduced has greatly assisted in curtailing crude oil theft.

On board the ship was the chief of naval staff Vice Admiral Ibok Ete Ibas and principal staff officers along with the chairman senate committee on Navy, Isa Hamman Misau.

NEWER POSTNigerian Youth Identified as a Productive Agent
OLDER POSTCentral Bank: ”It is not true that CBN allocates dollars”