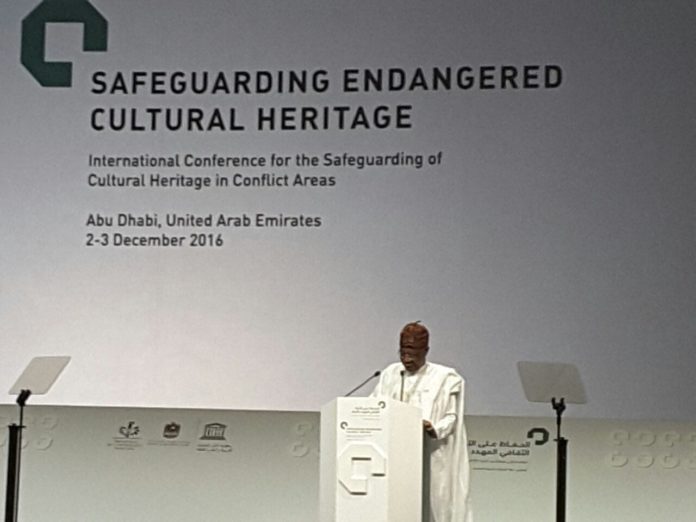 Nigeria Calls For Sensitization of Communities On Protection Of Cultural Heritage

FMIC, Abuja: The Minister of Information and Culture, Alhaji Lai Mohammed, has called for the sensitization of local communities across Africa in order to raise their consciousness about the importance of protecting cultural heritage against marauders.

The Minister made the call at the two-day International Conference on the Safeguarding of Cultural Heritage in Conflicts Areas, which rounded off in Abu Dhabi, United Arab Emirates, on Saturday.

He said during the crisis in Mali in 2012-2013, the great majority of historic manuscripts which were saved were housed by family libraries, adding: ”These private individuals, knowing the inestimable value of these manuscripts, devised strategies that got them out of harm’s
way.”

”For us in Africa, the pivotal position of the local people cannot be over emphasized. Therefore, the international fund to be established should also cater for the sensitization of local people. Another point linked to the issue of funding is that in Africa, we lag behind in
electronic preservation of heritage monuments, sites and manuscripts. The fund should also cater for this in the Internet age,” he said.

The Minister stressed the need for political will in order to sustain the efforts to protect cultural heritage in times of conflict.

Alhaji Mohammed disclosed that Nigeria has joined all the Conventions aimed at dealing with the threat to and destruction of cultural property, and that the country is now in the process of domesticating them.

”It is absolutely important for all the countries of the world to subscribe to all these conventions. Countries must show their deepest concern about cultural genocide being manifested in the the activities that have led to the convening of the conference. In addition to joining the treaties, it must be emphasized that nations must adopt or receive the Conventions into their domestic laws,” he said.

The Minister said Nigeria, like many other countries in the world, including Mali and Afghanistan, has recorded attacks on its cultural heritage, adding: ”One of the UNESCO World Heritage Sites in the country, the Sukur Cultural Landscape in the North-eastern State of Adamawa, was not spared by the Boko Haram insurgency.”

While calling on States to declare as a war crime the intentional destruction of cultural heritage, he stressed the need to check the activities of those involved in the art trade as well as the universal or encyclopaedic museums.

”The art trade, by which I mean auction houses – from the multi-nationals like Christie’s, Sotherby’s and Bonhams to the lesser ones – must be held to greater accountability with regard to their patronage of individuals and groups who come to them with unprovenanced cultural heritage objects… The Universal Museums like the British Museum, the Louvre, the Prado and the Armitage should desist from purchasing objects of uncertain provenance,” Alhaji Mohammed said.

At the end of the conference, which was attended by representatives of 40 nations, including several Heads of State and Government, the Abu Dhabi Declaration for the establishment of the International Fund for the Protection of Cultural Heritage in Armed Conflicts and the
creation of an international network of safe havens to protect cultural property during armed conflict was adopted.