The End Of Boko Haram Is Here – President Buhari 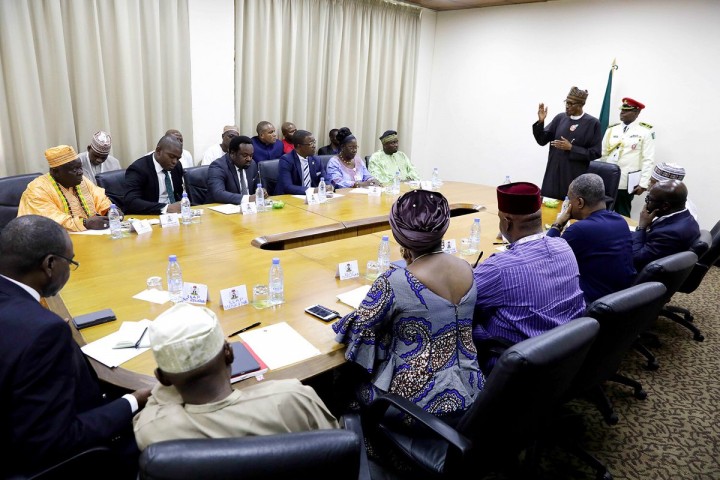 President Muhammadu Buhari Tuesday in Dakar, Senegal assured the international community that the end of Boko Haram terrorists was in sight, even as he hailed the increased cooperation between Nigeria and its neighbours in the fight against terrorism.

This was stated in a press release issued by the Senior Special Assistant to the President on Media & Publicity Garba Shehu on Tuesday.

While Speaking at a Panel of Heads of State at the 3rd Dakar International Forum on Peace and Security in Africa, the President also assured the international community that the security situation in Nigeria had improved significantly.

‘‘About a month ago, I spoke with the President of Chad and I was pleased that a number of Chadians and Nigerians that were Boko Haram members are surrendering to him en-masse. The good news I have is that the end of the raining season has come in the North eastern region of Nigeria.

‘‘Members of the Multi-National Joint Task Force (MNJTF) are in their respective positions and at an agreed time they will move simultaneously and spontaneously for us to see the end of Boko Haram. We are now operating in the Sambisa Forest and as far as Boko Haram is concerned in the Lake Chad Basin area, I think they are done for,’’ the President declared.

Highlighting the gains of the cooperation among the Lake Chad Basin Commission countries comprising Chad, Niger, Cameroon, Benin Republic and

Nigeria, the Nigerian leader told the gathering that Boko Haram is no longer holding any territory or Local Government Area (LGA) in his country.

‘‘Those who live in the North East know that Boko Haram is no longer holding a single territory in the 774 LGAs in Nigeria. But they have a system of using IEDs and they indoctrinate mostly teenage girls and send them to soft targets to churches, mosques and market places. That too is becoming very rear.

‘‘I think Boko Haram shot themselves in the foot when they gave their ideology a religious connotation by killing children in their schools, people in the mosque and churches and shouting Allahu Akbar.

‘‘This is a major contradiction as no religion advocates hurting the innocent. You can’t kill people and say Allahu Akbar. You either do not know what you are saying or you don’t believe it,’’ President Buhari said.

‘‘In the southern part of the country, stolen Nigerian crude is being illegally transported through the Gulf of Guinea and installations offshore are being subverted. We also have the problem of unemployment in Nigeria.

“With a population of 180 million people of which 65 per cent are under the age of 35, young Nigerians are looking for any kind of job to survive.