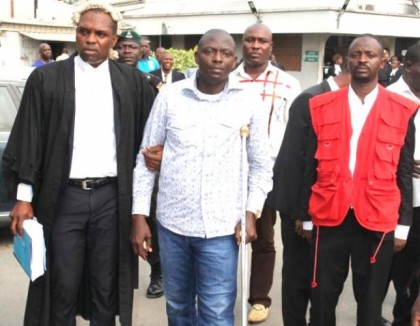 According to the EFCC Spokesman, Wilson Ujuwaren at the resumed hearing, the Prosecution Counsel Rotimi Oyedepo, informed the court of an amended charge and prayed that the charge to allow same in other to enable the defendant’s take their plea again.

One of the charges reads “that you Patrick Ziadeke Akpobolokemi, Major General Emmanuel Atewe, Kime Enzogu and Josephine Otuaga, sometime in 2014, in Lagos within the jurisdiction of this Honourable Court, with intent to defraud conspired amongst yourselves to commit an offence to wit: Conversion of the sum of N8, 537, 586, 798. 58 (Eight Billion, Five Hundred and Thirty Seven Million, Five Hundred and Eighty Six Thousand, Seven Hundred and Ninety Eight Naira, Fifty Eight kobo), property of the Nigerian Maritime Administration and Safety Agency, and you thereby committed an offence contrary to Section 18 (a) of the Money Laundering (Prohibition Amendment) Act, 2012 and punishable under Section 15 (3) of the same Act”.

They pleaded not guilty to the amended charges.

Adamu told the court that sometime in 2015, the EFCC received intelligence reports alleging mismanagement and laundering of funds under the leadership of Dr.Patrick Akpobolokemi part of which was the alleged conspiracy with the high command of the Joint Task Force, JTF, “Operation Pulo Shield” to which billions of Naira were laundered.

He further revealed that upon investigation, documents such as payment vouchers, transfer instructions and applications from JTF “Operation Pulo Shield” requesting financial assistance from NIMASA with details on how the money will be utilized was recovered from the headquarters of NIMASA situated at No 4, Boma road, Apapa, Lagos.

Letters requesting the account statements and opening package of the JTF ”Operation Pulo Shield” and the aforementioned companies were sent to their respective banks and responses were received. The letters were tendered and admitted as exhibits.

The witness, PW 2, further revealed that at the end of the investigation, it was discovered that over N4, 000,000,000 (Four Billion Naira) converted into U.S. Dollar was handed over to the 3rd and 4th defendants who acknowledged receipt of the funds and that piece of evidence was forwarded to the forensic unit of the EFCC for analysis to which they responded to.

The document was tendered in evidence.

Justice Saidu adjourned the matter to February 3, 2017 for continuation of trial.