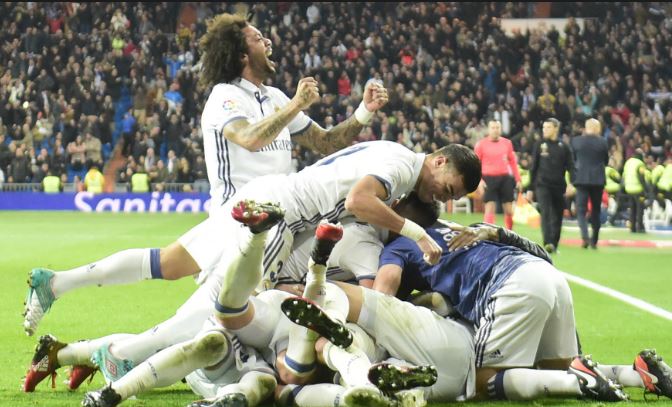 The run dates back to April’s 2-0 reverse at Wolfsburg in their UEFA Champions League quarter-final first leg and, in avoiding defeat since then, Zinédine Zidane’s men have usurped the Merengues’ 1988/89 vintage, who held the record of 34 matches.

Frenchman Zinedine Zidane’s side surpassed the record set by Leo Beenhakker  who coached Madrid giants in the 1988/89 with a record of 34 games unbeaten.

Madrid’s fans were put through the wringer on a dramatic night at the Santiago Bernabéu. Trailing 2-1 with six minutes remaining, the Whites – minus the rested Ronaldo, Modrić and Benzema – equalised through Mariano Díaz’s maiden Liga goal. Ramos won it with yet another late, late header.

The word Realis Spanish for Royal and was bestowed to the club by King Alfonso XIII in 1920 together with the royal crown in the emblem. The team has played its home matches in the 85,454-capacity Santiago Bernabéu Stadium in downtown Madrid since 1947.

Unlike most European sporting entities, Real Madrid’s members (socios) have owned and operated the club throughout its history.

The club is one of the most widely supported teams in the world.  Real Madrid is one of three founding members of the Primera División that have never been relegated from the top division, along with Athletic Bilbao and Barcelona.

The club holds many long-standing rivalries, most notably El Clásico with Barcelona and the El Derbi madrileño with Atlético Madrid.