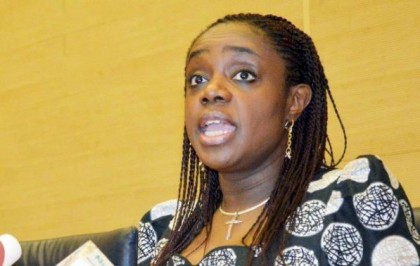 The Nigerian government has unveiled a 10-point fiscal roadmap, designed to stimulate the economy and set it on the path of recovery and growth, according to voice of Nigeria(VON)
Highlights of the roadmap were rolled out by the Minister of Finance, Mrs. Kemi Adeosun, who represented the Vice President Yemi Osinbajo, at the annual dinner of the Lagos Business School in Lagos south west Nigeria .

Adeosun itemised the fiscal policies and actions being taken to tackle the key barriers to economic growth.

A major component of the roadmap is to replace administrative measures on the list of 41 items with fiscal measures to reduce demand pressure on foreign exchange (forex) at the parallel market.

The Central Bank of Nigeria (CBN), in its wisdom, had barred importers from assessing forex, particularly the United States dollars, for the 41 items via the official window, a measure, which had generated intense controversy.

Though the measure was applied in good faith by the monetary authority, it pushed importers to sourcing forex from the parallel market, which led to forex shortage and inadvertently affected the value of the naira and the economy.

But with the federal government’s decision to reconsider its policy on the 41 items, the expectation, according to the roadmap, is that there would be a reduction in the demand for US dollars to ramp up forex supply.

Speaking at the session, which was attended by industry leaders across key sectors of the economy including oil, banking and telecoms, Adeosun said, “The Nigerian Government’s Fiscal Roadmap is addressing barriers to growth that will drive productivity, generate jobs and broaden wealth creating opportunities to achieve inclusive growth.”

She stated that the President Muhammadu Buhari administration was determined to convert Nigeria to a productive economy from the one that is consumption driven. To do so, she pointed out, the federal government would tackle the infrastructure deficit to unlock productivity, improve business competitiveness and create employment.

The minister stated that the government would actively partner the private sector to achieve this by use of a number of new funding platforms.

These, according to her, include the Road Trust Fund, which will develop potentially toll-able roads, and the Family Homes Fund, which is an on-going PPP initiative for funding of affordable housing.

In addition, Adeosun detailed a revision to the tax provision that allows companies to receive tax relief for investment in roads on a collective basis.

She explained that the existing provision that enabled companies to claim relief for road projects had only been taken advantage of by two companies, Lafarge and Dangote Cement.

This was because few companies were large enough to fund roads alone.

The revision, she noted, would now allow collective tax relief such that companies would be able to jointly fund roads, subject to approval by FIRS and the Ministry of Works, and share the tax credit.

This would be particularly attractive to firms in clusters such as industrial estates, many of which are plagued by poor road conditions.

She emphasised the role of infrastructure in creating inclusive growth, explaining the current barriers to growth in agriculture, solid minerals and manufacturing.

She stated that the drivers of inflation were structural and were being addressed through the focus on power, rail and road infrastructure.

Adeosun also outlined measures planned to deal with the problem of hidden liabilities, which were affecting the banking sector and efforts to revive the economy.

These liabilities were estimated at N2.2 trillion and would be addressed with a 10-year Promissory Note Issuance programme in conjunction with the Central Bank of Nigeria. This measure would be subject to a rigorous audit process of all claims to ensure validity and mitigate fraud and the impact of past corrupt practices.

Henceforth, the minister said that measures would be put in place to prevent recurrence of such a problem by ensuring that contracts are managed in a manner that firms have assurance over when they would be paid. She cited the fact that many contractors were owed as a reason that many of those recently paid by government were slow in remobilising to site.

According to her, “Some contractors had not been paid in the past 4 years and in some cases the banks they were owing, refused them access to the funds released, causing delays.”

She explained further that those receiving the Promissory Notes would be expected to provide a material discount to government.

The issuance was a solution to a long term problem that was ‘a drag on economic activity’.

Adeosun gave assurances that, despite the current challenges facing the Nigerian economy, the outlook is positive due to the strong fundamentals and the on-going reform programme.

She reiterated that the federal government was determined to create an enabling environment and put in place supportive policies to return to growth in 2017 including greater alignment of monetary and fiscal policies.