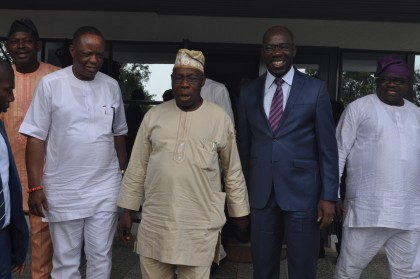 A government house statement by the Chief Press Secretary, Mr. John Mayaki, said Obasanjo was in Government House to give his blessings to Governor Obaseki, his policies, and programs, especially in the area of job creation, industrialization and wealth creation.

The statement added that both investors – ex-President Obasanjo and Okunbor had visited “Wells Sam Carlos Farm” in within Benin metropolis – along Sapele Road Bye-Pass before calling on Mr. Governor, Mr. Godwin Obaseki.

Read Also; Agriculture Is Our Path Way Out Of Recession – Obasanjo

It said former Obasanjo, who parried reporters’ questions said “I have come to visit the Governor and the Governor has accepted my visit.’’

In his normal humorous manner, Chief Obasanjo said, “I come salute Governor and Governor don pick my salute. That one no do?”

When prodded further, he said again, “I say, I come to greet Governor, I come salute Governor and Governor don pick my salute,” and laughed his way through the crowd of reporters who besieged him to extract words over his visit.

It is recalled that Capt. Okunbor had recently started a multi-billion naira agro-allied business in the State in partnership with a Mexican firm, Wells Sam Carlos Farm worth $750million (about N150 billion).