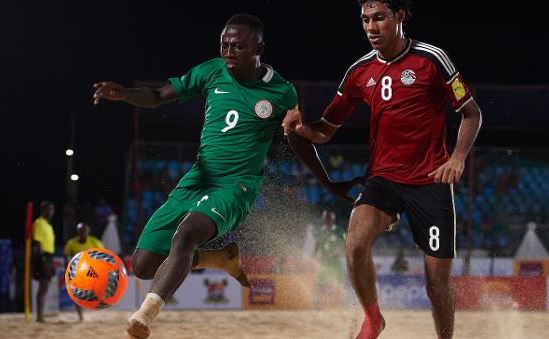 Emeka’s late strike helped CAF Beach Soccer Africa Cup of Nations hosts Nigeria to a 3-2 win against Egypt in Group A on Tuesday.

With a place at the FIFA Beach Soccer World Cup next year at stake, the home side spurned a two-goal lead as Egypt battled back through Mohamed and Abo.

However, Emeka’s second strike of the match – a wonderful curled effort – proved the difference as Nigeria kicked off with a win.

Captain Olawale gave Nigeria a first-period lead with a smart finish into the bottom left-hand corner, with Egypt’s best opportunity to level coming when M. Samir’s effort deflected over the crossbar.

Emeka doubled the Super Sand Eagles’ advantage with a cool finish past Zizo, only for Mohamed to halve the deficit shortly after.

And the sides were level through Egypt skipper Abo, prompting an enthralling final period.

Both sides looked dangerous on the attack and, while Ayalogu did well to thwart Egypt’s E. Bahari, Emeka popped up again to restore Nigeria’s lead with a curled finish into the top right corner.

And that strike proved the difference for the hosts, who moved to maximum points in Group A alongside Ivory Coast.

Other match-day 1 results include holders Defending champions Madagascar made a winning start to the 2016 CAF Beach Soccer Africa Cup of Nations, easing past Libya 9-5.

Senegal left it late to edge a tight contest against CAF Beach Soccer Africa Cup of Nations rivals Morocco on Tuesday – Fall’s double securing a 2-1 win in Group B.