2017 Budget Must Ease Burden of Our People, Says Saraki 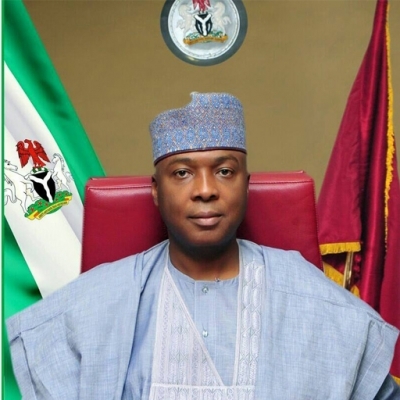 Senate President, Dr. Abubakar Bukola Saraki, on Wednesday, called on the executive arm of government to work to ensure that the 2017 budget truly ease the burden of Nigerians.
Saraki in his welcome address during the formal presentation of the presentation of the 2017 Appropriation Bill before a joint session of the National Assembly by President Muhammadu Buhari, said there is no hiding the fact that Nigerians are presently experiencing economic hardship.
According to him, the 8th National Assembly will work with the executive to ensure that it surmounts the present economic recession by passing the 11 economic reform laws alongside the 2017 budget.
“Our people must see that the singular pre-occupation of government is the search for the solution to the current economic hardship; and the commitment to ease their burden,” Saraki said.
Also Read; SP Saraki’s Speech during President Buhari’s 2017 Budget Presentation
“They don’t want to know what political parties we belong, what language we speak or how we worship God. They have trusted their fate into our hands, and they need us now more than ever, to justify the trust that they have reposed in us”, he stated.
He added that: “The people of Nigeria will pardon us if we do some things wrong. But they will not forgive us if we do nothing. And that is why, Mr. President, the two chambers have taken a position that whatever may be our differences or opinions on issues of the economy we will all work with one common purpose for this reason.”
Also Read; Saraki Commiserates With Victims of Uyo Church Collapse
Saraki noted that when the National Bureau of Statistics (NBS) confirmed that the nation’s economy has slumped into a recession, “the National Assembly rose with one voice.
“Through a joint resolution, we recommended that you make a ‘state of the nation’ address on the plan of government to get us out of recession and have 20 important Executive actions that in our view needed to be taken to get the economy back on track,” Saraki said.
“The National Assembly on its part listed and prioritized 11 economic reform bills for passage. We intend to get these bills ready alongside the 2017 Appropriation bill. We believe that the core elements of these bills will aid the Executive in mobilizing the required private capital into the general economy, but especially the infrastructure market”, he stated.
The Senate President said the harsh economic realities confronting the nation calls for greater collaboration by all arms of government to find urgent and sustainable solutions.
Also Read; Saraki Felicitates With Muslims At Eid-el-Maulud
“It is in times like this when we are challenged from all sides that we need to develop new relationships and cultivate more friends. No one can clap with one hand and expect to be heard. This is the time when compromise, engagement is the tool necessary for successful collaboration and cooperation.
“This is why I encouraged the Executive to continue with its engagement plans across all sections and stakeholders in the country particularly with our brothers in the Niger Delta and all parts of the country where instability is impacting on our collective economic and security aspirations,” he stated.
He said that the overarching purpose of the 2017 budget should essentially be to ease the economic pressure “on our people in general and the poor most especially.”
According to him, “The 2017 budget assumes even a greater significance, particularly in this time of recession. Mr. President, the feedback we get from visits to our various constituencies is that there is a hardship in the land.
“We can see it and we can feel it. This situation, therefore, commands all of us as a government to a greater sense of urgency. We cannot work magic, but we must continue to work the clock”.
He noted that the only way to cut down on the nation’s foreign exchange needs, create jobs and stimulate entrepreneurship in the country is to promote local manufacturing and investments.
“This is why the National Assembly injected the Made-in-Nigeria amendment into the Public Procurement Act. We are expectant that with your leadership, Mr. President, we will achieve even much more in this area. It is the hope of the National Assembly that the 2017 budget will continue to proactively pursue this policy objective.
“Though we are confident that we are receiving from you a very well-articulated budget proposal, it is worthy to point out that the best-produced budget from the executive at all times still remains a proposal according to our constitution which the National Assembly will work assiduously on,” the Senate President stated.
While commending the improvement in the time of presenting the 2017 budget compared to that of 2016, the Senate President pledged the commitment of the National Assembly to work on the budget in view of the current economic recession.
He stated: “I wish to note that the National Assembly recognizes however that the problem with our budget and budgeting process goes far deeper than the relative progress we have made.
“This is why in August this year, I inaugurated a joint Executive/Legislative committee and a technical committee to review our budget systems and identify ways we can make them more transparent, more participatory, more result-oriented and therefore, more effective.
“The committee has since submitted its report and the National Assembly has already started the process of implementing the recommendations. Already, we have tried to bring the key highlights of the report into effect within the 2017 framework. These include pre-budget consultation and engagement, greater information sharing and recording, Public hearing on the budget bill; Drafting of an Organic Budget Bill and Amendment of the Public Procurement Act.”
He assured that the legislature would not waste a single minute in the course of getting the budget approved.