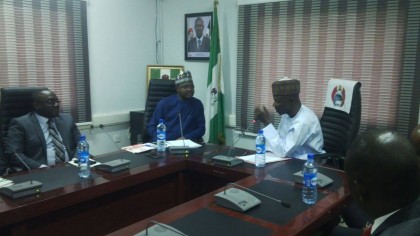 Ibrahim Magu, Acting Chairman of the Economic and Financial Crimes Commission, EFCC, has identified accountability, probity, and transparency as crucial in protecting the investments of local and foreign investors in Nigeria.

He made this observation on Thursday, December 15, 2016, while playing host to members of the management team of the Securities and Exchange Commission, SEC, who were on a visit to the EFCC at the Commission’s Head Office, Abuja.

The EFCC boss commended the collaborative efforts between the two agencies which he said had led to recoveries of stolen monies.

“The work is so enormous but the collective efforts and collaboration is absolutely necessary so that a lot of ground will be covered”, Magu said.

He assured the SEC DG of the Commission’s commitment to the agency’s mandate and implementation of the MoU between the SEC and the EFCC. He also pledged that joint training would be organized in the near future to bridge the gap between both agencies.

The anti-graft czar, however, advised the SEC to always tip off the EFCC before the suspension of erring brokers in order to increase the chances of successful investigations and recovery of monies.

Earlier, the leader of the delegation, Mounir Gwarzo, who is also the Director-General, SEC, in his remarks lamented the limitations to their enforcement authority which has over time, hampered the SEC’s effectiveness in recovering monies lost by investors to fraudulent brokers and dealers.

He recalled the numerous benefits of the close collaboration that the SEC and the EFCC had shared which he said had yielded invaluable training of SEC staff by the EFCC, as well as the MoU in the works.

Read Also; EFCC arrests an illegal oil vessel at the point of discharge

Gwarzo also mentioned that several criminal cases against defaulters of SEC policies that are not under the SEC’s jurisdiction had been sent to the EFCC, and sought feedback on the status of such cases.

The DG SEC stressed that closer collaboration between both agencies would go a long way in restoring the confidence of local and foreign investors.