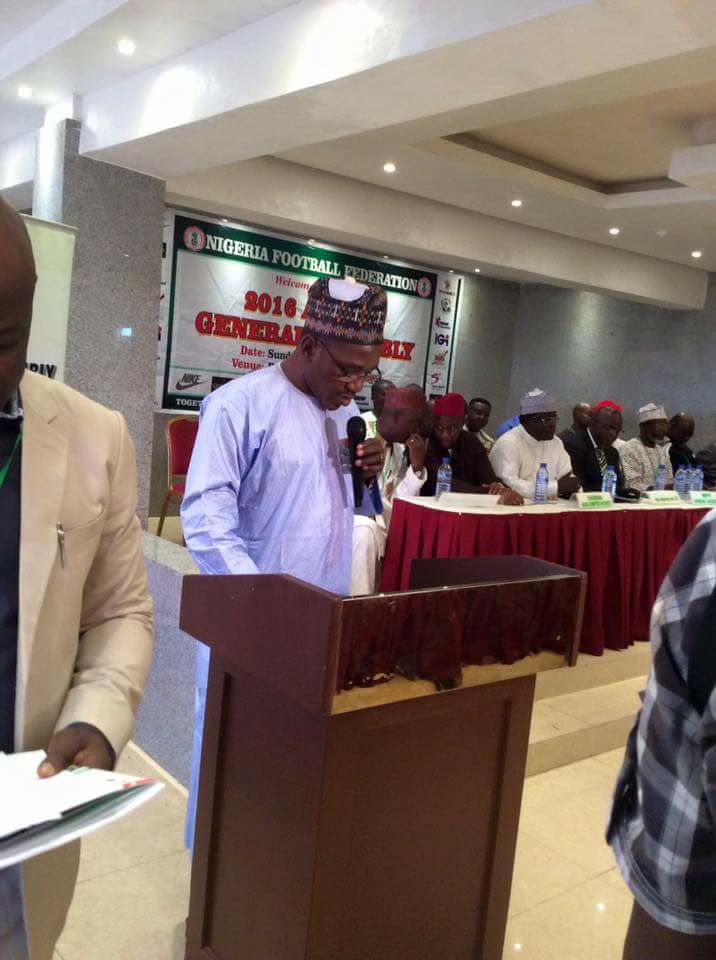 Full Speech of Minister of Sports At The NFF AGM

The President of the Nigeria Football Federation,
Mr. Amaju Pinnick,

Distinguished Members of the Executive Board of the Nigeria Football Federation,

I bring to you fraternal compliments from the Federal Ministry of Youth and Sports Development. May I express my gratitude to the Nigerian Football Federation for inviting me to its 2016 Annual General Assembly, even though I received the notice of invitation on Thursday December 15, 2016 vide a letter signed by the Secretary General, Dr. Sanusi Mohammed on the 14th of December 2016.

That I am only given four days’ notice suggest that to me that my invitation may be an afterthought because this is not an extra ordinary congress but Annual General Meeting. By convention, all the delegates to this meeting must have gotten their notices at least 21 days ago. Permit me to also observe that the office of the Honourable Minister of the Federal Republic deserves some respect.

I wish to appreciate the Executive Committee and the entire members of the Nigeria Football Federation (NFF) for deeming it fit to invite me as the Special Guest of Honour at your 72nd Annual General Assembly. However, Mr, let me express my concern that could this General Assembly come at this period considering the recent unwholesome developments in our football life? How can Nigerians reconcile the claims by the NFF that it could not paid the Super falcons for paucity of funds yet on another breath it is holding an Annual General Meeting which the resources if deployed would have mitigated the situation of the players. I hope this meeting will address the immediate and remote causes of all the issues surrounding football in Nigeria which have generated negative publicity in recent time. 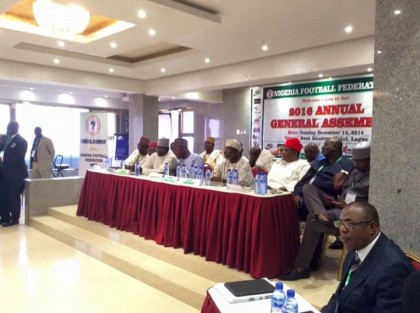 You are all aware that the status of Football in Nigeria is beyond the ordinary everyday sport. It has become a means of national unity, a source of joy to the generality of Nigerians, a political tool, etc. The sport, as it is today, is a passion that unifies Nigerians, irrespective of religious beliefs, political inclinations, ethnic alignments, geographical boundaries and social strata.

Let me congratulate members of the Nigeria football family for the victory of the Super Falcons at the recently concluded African Women Nations Cup in Cameroon as well as the successes recorded so far by the Super Eagles in their qualification matches towards 2018 World Cup. It is worthy of mention that the delay in the payment of the Super Falcons entitlements which degenerated into a national embarrassment could have been averted if the Nigeria Football Federation effectively managed the situation. The NFF has formed the habit of requesting for funds for its program at very short notice and thereafter resort to blackmail to hasten the approval and release of such funds from Government. We cannot continue to administer our football in this manner any longer.

Therefore, the NFF is directed to submit comprehensive programs for 2017 to the Ministry by January with all request for interventions for scrutiny and effective planning. The responsibility of NFF is very clear when dealing with national and international competitions. And nothing below international best practices is acceptable during preparation, qualification and participation of our National teams.

Mr. President, Distinguished Delegates, I received a report from the NFF intimating me of FIFA’s audit Report which raised queries on the management of $1.1 Million FIFA’s development grant to the NFF. According to the Report, FIFA has withheld all development funds to the Nigeria for lack of proper documentation of $802,000 out of the funds released to NFF. This is a very serious issue that must be given urgent attention to avoid another international embarrassment, more so that the present administration under the leadership of Mr. President, His Excellency, Mohammadu Buhari has zero tolerance for any act of mis-appropriation, mis-application, embezzlement or fraud in any guise. 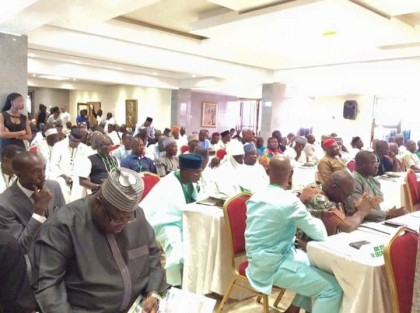 To this end, the NFF is directed to immediately provide my office with detail information of receipt, disbursement and application of the FIFA development grant accordingly. In addition, a reputable audit firm should be appointed urgently to check the account books of the Federation to ensure that funds are judiciously expended. The audit report must be made public so as to promote transparency, build credibility and enhance your market value.

I wish to remark that, it is a policy of Government to support and encourage Nigerians to vie and aspire for position in international organizations. However such persons must possess the requisite qualification for the post and the wherewithal to succeed. So it was heart-warming when I received a letter from President of NFF, Mr. Amaju Pinnick declaring his interest to vie for a position in CAF Executive Board.

Nonetheless, my office has been inundated with different reports suggesting that the Board of the NFF is divided over the issue. From every indication, it seems to me that as a Board, the issue of Mr Pinnick contesting for any position in CAF has never been discussed.

More so that some members of the NFF Board are claiming ignorance of Mr. Pinnick’s nomination, it is therefore clear that something is wrong somewhere because this portraits that there is a crack on the wall. We should be reminded that as we consolidate on the gains of the successes recorded so far, we cannot gamble with anything that will thwart our collective resolve to deliver the World Cup ticket to Nigeria.

Consequently, the NFF is hereby directed to avail the Ministry with the minutes of the meeting where Mr. Pinnick’s nomination was discussed and approved so as to set the records straight. If our quest for CAF seat is to materialize, then Mr. Pinick will need the support of everybody. I therefore enjoin members of the Federation to close ranks and build bridges without which Nigeria Football will be adversely affected.

Mr. President, Distinguished Delegates, Ladies and Gentlemen, as I end this address, I urge you to remember that Football is almost like a religion in Nigeria and we cannot afford to continue to do things the wrong way yet expect better results, we must strive to get it right at all times because our action and inaction affect Nigerians adversely.

On this note, it is my singular pleasure to declare this Annual General Assembly open. I wish you fruitful deliberations.

Thank you and God bless Nigeria.