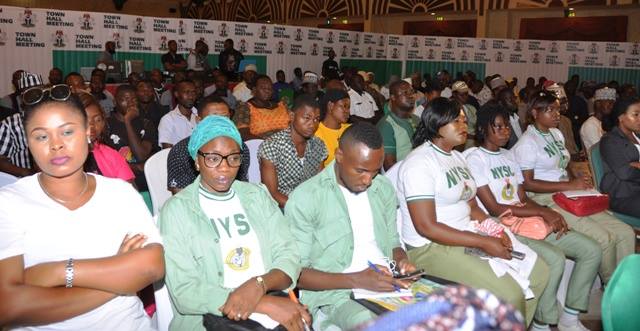 Segun Adeyemi, Abuja: The Minister of Information and Culture, Alhaji Lai Mohammed, has said the Federal Government’s massive investment in Social Programmes will help accelerate the process of job creation, especially for the youth.

Speaking at the Special Edition of the FG’s Town Hall Meeting for Youths in Abuja on Tuesday, the Minister also said the government places a serious premium on youth empowerment, youth development, and youth engagement, hence the decision to organize the Town Hall Meeting specifically for them,

“We have no choice because, according to the National Population Commission, more than half of Nigeria’s population are under 30 years of age! No government can afford to ignore this important demographic group, plus the youths are no longer just the leaders of tomorrow, but today’s leaders too!” he said.

Alhaji Mohammed said the Administration is investing massively in the Social Investment Programmes that benefit youths, listing them as including the N-Power Volunteer Scheme; the N-Power Job Creation Programme that provides loans for traders and artisans; the Home-grown School Feeding Programme, the Conditional Cash Transfers to the most vulnerable members of the society and the Family Homes Fund, a social housing scheme.

“As many of you are undoubtedly aware, 200,000 jobs were created in the first phase of the N-Power Volunteers Programme. That is perhaps the highest number of jobs that have been created in one fell swoop by many governments in the history of our country. Some 300,000 jobs are next in line, to bring the total to the promised 500,000 jobs. These jobs benefit mostly the youths who will be engaged the areas of education, healthcare and agriculture.”

“Also, the Home-grown School Feeding has already taken off in three states – Anambra, Kaduna, and Osun. It is now being scaled up to 11 of the 18 states designated for the first phase. Already, some 25,000 cooks have been trained in 9 states. Concerning the Conditional Cash Transfer, the data of the beneficiaries in 9 states are now ready, and the payment process for those states is in top gear.”

“For the Micro-credit scheme, more than 1 million Nigerians are set to get loans at very low-interest rates through the bank of industry.
The loans range from N20,000 to N100,000. The pilot scheme is taking place in 8 states and here in the Federal Capital Territory,” he said.

The Minister disclosed that in order to sustain the Social Investment Programme, the N500 billion Naira for the programme has been retained in the 2017 budget, which was recently presented to the National Assembly by Mr. President.

He said on its part, the Ministry of Information and Culture is leveraging on the Creative Industry, which is youth-driven, to create
jobs and unleash the huge potentials of the youths.

“We have signed two Memoranda of Understanding with the Tony Elumelu Foundation and the British Council to train festival managers, build the capacity of our youths and link the Creative Industry with the Business World. Our imminent transition from Analogue to Digital Broadcasting is set to create 1 million jobs in 3 years, with most of those jobs going to the youths.”

“These jobs are already being created as we speak. This is because as the Digital Switch Over train arrives in Abuja this Thursday and then proceeds to other parts of the country, we will need hordes of installers, retailers, repair technicians and marketers for the set-top boxes or decoders that will be required to meet the demand of the 24 million TV households,” Alhaji Mohammed said, adding that the huge quantum of content that will be required for the DSO would also provide opportunities for the ”creative mind and the technically-savvy.”

The Minister said the government was working hard to ease the hardship in the land and sought the ”undiluted support” of the youths in this regard.

“This Government is unrelenting in its efforts to ease the hardship in the land, especially youth unemployment, brought about by years of poor or lack of planning, profligacy, mismanagement of funds, massive corruption and lack of investment in social investment programmes. We did not create today’s hardship, but we are resolved to end it and make life more abundant for our people,” he added.

The Town Hall Meeting, which started in Lagos in April and has also been held in Kaduna, Kano, Uyo, Enugu and Abuja, was introduced to bridge the communication gap between the government and the citizens and also to serve as a feedback mechanism for government programmes.