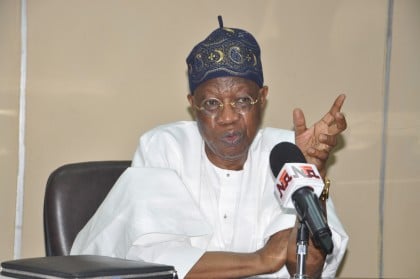 The Federal Government has congratulated the gallant troops of theNigerian military for finally seizing the Sambisa Forest from the BokoHaram terrorists and securing the North-east, paving the way forSunday’s re-opening of two strategic roads in Borno State.

In a statement issued the Special Assistant to the Minister Segun Adeyemi,
the Minister of Information and Culture appealed to Nigerians to continue tosupport the troops as they clear the remnants of the terrorists whoare now on the run.
Also Read; Lai Mohammed Shocked Over RATTAWU Scribe’s Death
He also called for increased vigilance among Nigerians, as Boko Haramescapees seek to integrate themselves into communities far and near,saying eternal vigilance is the price of freedom.The Minister urged Nigerians to keep our gallant and victorious troops in their prayers and to also imbibe the mantra of ‘if you see something, saysomething’ as a way of ensuring that no escaped terrorist is able towreak havoc in their communities adding that It is also important to know thatnow that they have been dispossessed of their fortress, the Boko Haramescapees will intensify their cowardly attacks on vulnerable targetsif only to maintain an illusion of terror. But there should be nopanic because the worst is over, the Minister maintained.
Also Read; The Benefits Of Meeting Broadcast Digitization Deadline – Lai Mohammed

While commending the military for the re-opening of theMaiduguri-Gubio-Damasak road and the Maiduguri-Mungono-Baga road,which link Nigeria with neighboring countries, he hailed Borno StateGovernor Kashim Shettima for his unwavering support for the militaryand his administration’s determination to quickly restore normalcyacross the state, saying it was in recognition and celebration of the greatfeat performed by the military that he decided to lead over 30Nigerian and international journalists to join the Hon. Minister ofDefense retired Brig.-Gen. Mansur Dan Ali, the Service Chiefs and theGovernor of Borno State, at the opening of the two strategic roads inBorno on Sunday, but Unfortunately, due to bad weather, the
flight to Maiduguri from Abuja was canceled after several hours of
waiting at the airport in Abuja.
Lai Mohammed said in the overall, the leadership provided by PresidentMuhammadu Buhari gave birth to the much-needed impetus for the military’svictory in the North-east, and urged Nigerians to continue to givetheir unalloyed support to the President in his untiring efforts torestore peace and security across the country and also revamp theeconomy