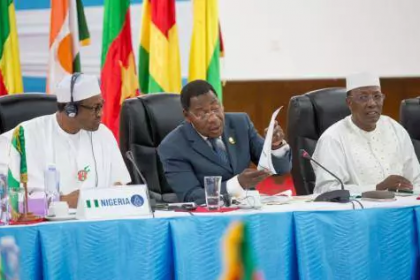 The 11th Summit of the Heads of State and Government of the Niger Basin Authority member Countries has ended in Coutonou Benin Republic with the election of President Muhammadu Buhari as new president.

President Buhari was unanimously elected by the Nine participating Heads of State to succeed president Boni Yayi of Benin Republic is to serve for a period of two years.

The leaders also elected Dr Tukta Bugena from Chad as the new Secretary General of Niger Basin Authority from the withdrawal of other candidates including Nigeria’s Garba Abubakar Iliya.

Member countries of the Niger Basin Authority have resolved to work assiduously with a common vision of integrated approach towards sustainable development of resources along the Basin of River Niger for mutually beneficial economic growth.

This followed the adoption of the 2016-2024 operational plan of the Niger Basin Authority at the end of the 11th Summit of Heads of State and Government of the region in Cotonou,Benin Republic.