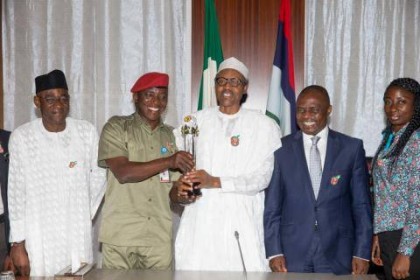 President Muhammadu Buhari Monday in Abuja spoke of a love relationship between him and the game of football.

The President was speaking after receiving the Glo/CAF Platinum Award for Good Leadership which was conferred on him last week in Abuja in recognition of his support for football which resulted in Nigeria winning two major international tournaments last year.

The Minister of Youth and Sports Development, Mr. Solomon Dalung received the award on behalf of the President and presented it to him at the Presidential Villa today.

“We have had very good fortune in football since you came to office and the sports family is very happy,” the Minister of Sports told President Buhari while presenting the award to him.

Responding, President Buhari recalled that Nigeria first won the Under-17 World Cup in 1985 in China, when he was military head of state.

“Thirty years after the first victory, Nigeria won again last year. What a fabulous coincidence. I think football loves me,” the President said.

He thanked the Confederation of African Football (CAF) for honouring him with the award.