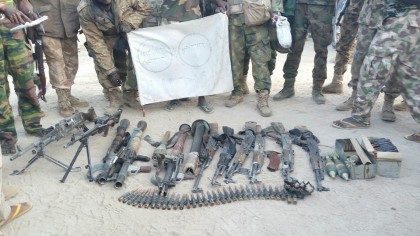 In its determination to wipe out insurgents in the North East. Troops of Operation Lafiya Dole recorded huge success. Troops of 25 Task Force Brigade on routine operation to clear Ajigin had contact with Boko Haram terrorists (BHT), in process several insurgents were killed, while 50 motorcycles and 3 vehicles were captured and destroyed. At the end of the clearance operations a number of locals who were held hostage by the BHT were rescued.

Similarly, our troops along Damboa – Chibok road arrested some unknown vigilantes, one of whom claimed to be the Village Head of Kopchi in company of 42 others claimed to be operating around Madagali general area, six among the 42 were apprehended for carrying AK 47 rifles and 15 Magazines. When accosted the suspects claimed that they are in Damboa to identify a suspected BHT arrested in Kaya village. They are presently undergoing interrogation.

On the 24th January 2016 at Chukun Gudu, troops on a clearance operation had encounter with BHT. During the encounter insurgents were dislodged in the process, one killed while several others sustained gunshot wounds. In addition, 2 double barrel gun, 4 rounds of 9mm ammunition, 1 solar panel, mechanic tools were recovered.

Similarly, troops of 103 Battalion on clearance operation along Kawuri in Maimiari village intercepted 17 BHT suspects. The troops also rescued some elderly women and children from the village and took them to IDPs camp in Konduga.

In another development, troops of 151 Task Force Battalion on a fighting patrol along Banki Junction to Ngurosoye and Bulamanjari villages, recovered Telecom mast hoisted with Boko Haram flag. The troops are currently maintaining blocking position against fleeing terrorists in the general area.

Troops also intercepted 2 suicide bombers trying to infiltrate Maiduguri through Muna Dalti, about100 metres ahead of our troops and CJTF checkpoint. The suicide bombers were halted but refused to stop and blew themselves up. No causality was recorded on our troops and civilian JTF. The area has been cordoned while aggressive search is going on in the general area.

The Theatre Command wish to reassure the public to its determination to safeguard the lives and properties. Now the heat is on the insurgents, there is desperate likelyhood to penetrate innocent and attack soft targets in towns villages and cities. The public is once again reminded to remain vigilant and report any suspicious movement persons and objects to the nearest security agency.