We are Committed to Global Peace – CDS 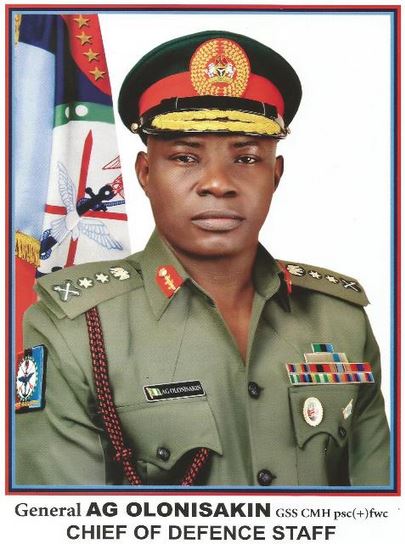 The Chief of Defence Staff, General Gabriel Olonisakin has re-emphasised Nigeria’s commitment to global peace and security.  He reiterated that Nigeria has been maintaining steady deployment of troops to hot spots around the world to maintain and enforce peace. General Olonisakin made this disclosure at Defence Headquarters Abuja when the Deputy Military Adviser, United Nations Peace Keeping Operations, Major General Adrian Foster, paid him a courtesy call.

The CDS pointed out that Nigeria had been actively involved in peace keeping operations around the world before her independence and has kept the tempo, ever since then despite its security challenges. For instance, the CDS revealed that Nigerian troops are presently on UN missions in Guinea Bissau, Mali, Dafur, Liberia and many other countries across the globe. For this commitment and unalloyed loyalty to UN missions and obligations, Nigeria, he said, deserved more support and recognition from the world body. Hence, General Olonisakin solicited for Nigeria, quality and reputable representations in the area of UN positions and appointments.

The CDS thanked the UN for the confidence reposed in the Nigerian contingents to its mission areas which justified their retention, especially in Dafur and promised that Nigeria would continue to be a key player in world’s politics and diplomacy as well as maintenance of peace and security. He used the occasion to call the attention of the world body that the challenge of insurgency in Nigeria is a regional threat that deserves the UN active collaboration and support to end the menace as soon as possible.

Earlier in his remark, the guest, Major General Foster stated that he was in Nigeria to thank the Armed Forces for its contributions towards the world peace through its active participation in the United Nations Peace Keeping Operations around the world. General Foster further stated that he was in the country to access the situation regarding its war against insurgents in order to recommend to the UN to rally support for the country to overcome its multiple security challenges for the overall benefit of the mankind.