H.E. Dr. Aisha Laraba Abdullahi, Commissioner for Political Affairs of the African Union Commission and Ambassador Gary QUINCE, Head of the EU Delegation to the AU met today at the AU Headquarters to endorse a joint Action Plan in the area of Human Rights and Transitional Justice in Africa. 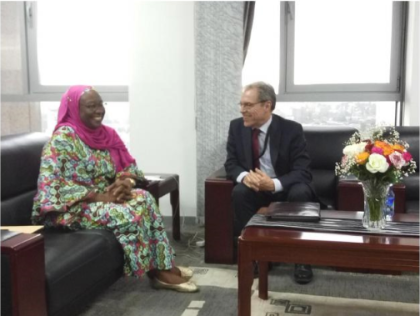 The two sides expressed their appreciation to the high-level of cooperation that exists between the AU and EU in the area of human rights.

Commissioner for Political Affairs thanked the EU Side for its continued support to the work of the Human Rights and Transitional Justice Unit of the Department of Political Affairs, which continues to promote the African Human and Peoples’ Rights System. In particular, the AU policy instruments and mechanisms on human rights did pave ways for the advancement of human rights promotion and protection on the continent. She further indicated that the promotion of the African Human System led to the creation of strategic measures leading to acceleration of the attainment of respect for human rights, gender equality, and women’s empowerment as well as measures to support Member States emerging from conflict in their pursuit of accountability, justice and reconciliation.

Dr. Abdullahi also highlighted the fact that the African human rights instruments further provided practical guidance to Members States in their conduct and pursuit of human rights protection. She also added that the values of the African Union Human and Peoples’ Rights Instruments and Mechanisms rests on their recognition and acceptance by Member States as declaratory of broadly accepted goals and principles within the African Community.

In order to accomplish the intended human rights projections for the year 2016 and beyond, both sides recognized the declaration of 2016 as the year of human rights in Africa and Europe by the African Union and the European Union. And in this regard, the EU committed itself to support the Department of Political Affairs financially and technically to implement the following activities as part of Project 2016: ratification of human rights instruments at the national level; training for African National Human Rights Institutions; the justice, truth and reconciliation in South Sudan within transitional justice policy frameworks; seminar on freedom of expression and access to information; workshop on freedom of association; development of national action plans on safety and security of journalists and freedom of expression advocates in conflict zones in Africa; establishment of the Pan African Institute for Human Rights; establishment of an AU Human Rights Memorial; deployment of Human Rights Observers; the development of a policy framework for the implementation of the UN Guiding Principles on Business and Human Rights; in addition to the organizing of a High-Level Dialogue on the promotion and protection of Human Rights.