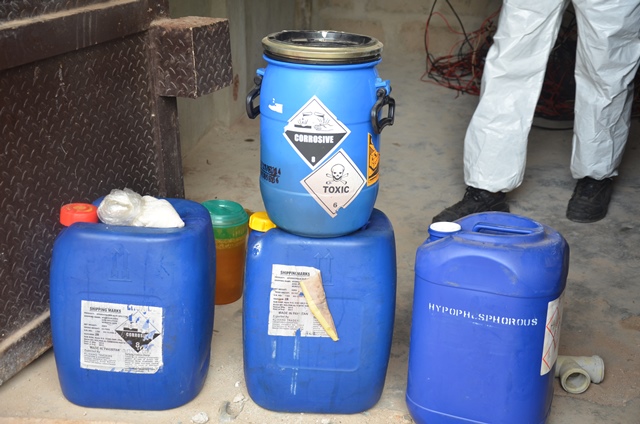 The National Drug Law Enforcement Agency (NDLEA) on Saturday said it discovered a super laboratory for the illicit production of methamphetamine located at Asaba, Delta.

This was made known in a statement issued and signed by the agency’s spokesman, Mr Mitchell Ofoyeju in Lagos

The statement said that those arrested (names withheld), include four Nigerians believed to be joint owners of the said laboratory and four Mexicans, who are methamphetamine production experts, hired as technical partners.

‘The statement said that super methamphetamine laboratory is similar to the ones found in Mexico and it is the first to be discovered in the country.

The statement quoted the NDLEA Chairman, Mr Muhammad Abdallah as saying that the laboratory had the capacity of producing between 3,000kg and 4,000kg of methamphetamine per production cycle.

Abdallah described the operation that led to the arrest of the suspects as a technically undercover assignment, adding that it also led to the dismantling of a drug trafficking organisation.

The Agency warned that unless drastic measures were taken against the trend; the rise in super laboratories would put Nigeria on the global spotlight in methamphetamine production.

According to the statement, more citizens will equally be targeted by drug cartels that are searching for drug smugglers outside the country with the tendency to increase the number of Nigerians in foreign prisons, thereby affecting the image of our country.

According to the agency, the estimated cost of cleaning this laboratory is about N35 million.

It said that there is a need for more funds to carry out public enlightenment to create awareness and provide information to help people make informed decisions.

The agency, which called for protective measures to safeguard the lives of its officers and those of innocent Nigerians, advised members of the public to be vigilant and report suspicious factories to the NDLEA.

The statement also said that such laboratories can be detected by irritation caused by chemicals, smell of chemicals and coloured water on sewage,

The agency also cautioned the people to avoid houses used for methamphetamine production, adding that chemical containers must not be used for domestic purposes.

NDLEA also reiterated its commitment to work with the relevant agencies like the Ministry of Health and Environment and Environmental Protection Agency in enhancing public health and safety of the people.