The Special Representative to Secretary General (SRSG) in the United Nations’ Mission in Liberia (UNMIL), Mr Farid Zarif, has eulogized the Nigerian Contingents for their untiring efforts and overall success in restoring and sustaining peace, law and order particularly in Liberia and other parts of the world. 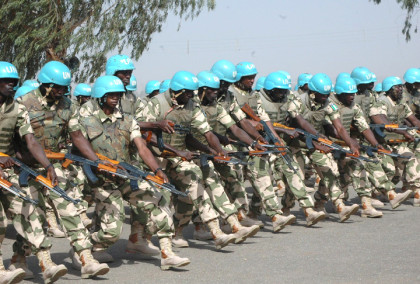 Mr Farid stated this recently at a combined medal presentation parade organized for the 2 Nigerian Battalions (NIBATT) 36 and 37 on peacekeeping mission in Liberia. He reiterated that Nigeria’s history in peacekeeping mission could be traced back to 1960 when Nigeria first participated in the Peacekeeping operation in Congo, adding that the country had been engaged in providing support in efforts for consolidating peace and preventing conflicts even before the UN took over operations in Liberia.

While addressing the troops of the Contingents, the SRSG particularly expressed his deep gratitude and appreciation to the 80 strong female components of the Nigerian contingent in Liberia. In his words, “you have exemplified valor, courage, dedication and professionalism. You have proven to yourselves and to everybody else that if given an opportunity, you will not be behind the comrades, the male components of the contingent.You will perform as well as they do or even better if given the opportunity. I salute you and you have been an aspiration to the people of Liberia particularly the female members of the community who see in you a potential for their own future and who can visualize their own options of the future not necessarily in uniform but in all aspects of life. So thank you very much for that contribution.”

The guest of honour also added that, when there was relapse in the relative laws in Liberia, ECOWAS Monitoring Group (ECOMOG) including a very significant contingent of Nigeria, had to be redeployed in order to bring back law and order in the civil war ravaged country of Liberia. He revealed that the effort became the precursor for creating conducive ground for the United Nations Mission in Liberia (UNMIL) to deploy back in October 2004, adding that without such preparatory work of the Nigerian troops, it would have been difficult to get consensus in the Security Council to have UNMIL deployed in Liberia. At the end of his speech, the SRSG along with other important dignitaries from the UN and representative of the Liberian President, presented the medals of honour to the colorful Nigerian contingent comprised of a colour party and 4 guards drawn from troops of NIBATT 36 and 37, as colourful displays showcasing Nigeria’s rich multicultural heritage by members of the two NIBATTs clamored the events.