High-Level Round-Table Discussion on Harmonization, Synergies and Sensitization: The Need for a Coherent Development Approach Among African Countries 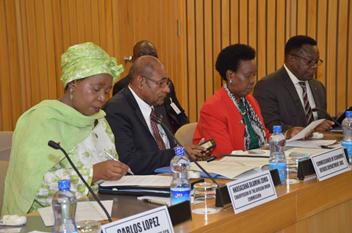 Addis Ababa, 4 April 2016– African countries must find each other and work together in areas of mutual benefit instead of competing against each other, if development is to leapfrog on the continent.

This came out at a high-level round-table discussion on Harmonization, Synergies and sensitization: the need for a coherent development approach organised at the margin of the 9TH Annual Joint Meetings of the AU Specialized Technical Committee on Finance, Monetary Affairs, Economic Planning and integrated and ECA Conference of African Ministers of Finance, Planning and Economic development, holding at the Conference Center of the UNECA in Addis Ababa, Ethiopia.

Chaired by H.E. Dr Nkosazana Dlamini Zuma, Chairperson of the African Union Commission (AUC), it emerged in the discussion that some African countries were reluctant to share knowledge which in some cases would benefit their neighbours, instead of letting them attempt to re-invent the wheel, as it were.

Of concern to some countries, was the fact that some successful economies were reluctant to share knowledge and expertise with their neighbours, yet that information could uplift the economy of their neighbours.

“We have seen instances whereby successful economies have displayed reluctance in sharing or opening up, and we think this is a reaction which does not move the continent forward,” said a speaker from Somalia contributing to the debate.

One of the speakers at the roundtable, Mr Mukhisa Kituyi, the Secretary General of the United Nations Conference on Trade and Development, said poverty was like Ebola as it did not respect boundaries.

“In Asia, larger economies have lifted their neighbours, and China is a case in point. Most Asian countries have benefitted immensely from the Chinese boom. The success stories lift the small economies as the tide rises,” he said.

“There is need for communications among ourselves on what are best practices and failures. We must learn to share information and create regional corridors and infrastructural development that benefit our people.” Added the AUC Chairperson.

A contributor from Ghana said in West Africa they had gone a step further and established incremental development goals which were benefitting the bloc.
“We have adopted a synchronized budgeting and accounting system which has made our accounting principles easier. In utilities and infrastructure development, we have established the West African Power pool where regional countries share energy,” said the participant from Ghana.

“Ghana and Togo are also working together to pool resources where water is concerned.” She concluded.
Dr Frannie Lautier, the incoming senior vice-president of the African Development Bank, said “Where we are depends on where we want to place ourselves,” she added that “As countries we should support national planning commissions as they provide the link to long term thinking and data collection.”
Lautier said Africa will not succeed without looking at agriculture and women.

“We must transform African economies through agriculture. Agriculture can lift manufacturing in addition to providing food elf-sufficiency. But this cannot success without the involvement of women, who constitute 50% of Africa’s population, and the youth.

“Ethiopia is a good example of how Public Private Partnership (PPP) has worked. The government has put upfront support and the private sector has come in to develop infrastructure for the benefit of the country,” Lautier said.

Dr Dlamini Zuma said there was no need to concentrate on monitoring and evaluation at a time when no development has taken place.’
“There must be development first, and then one can start monitoring. How do you monitor what is not there,” she asked.

The AUC Chairperson further stated that most of the development approach aspirations Africa was looking for, were mentioned in the Agenda 2063 document. The document detailed a laundry list of threats such as conflict, instability, corruption, social and economic inequalities, organized crime and illicit financial flows, mismanagement of diversities, the ascendancy of religious fundamentalism, failure to harness the demographic dividend, escalation of Africa’s disease burden, climate risks and natural disasters and external shocks.