#WorldHealthDay 2016: Over 1.5M Cases Of Diabetes In Nigeria, Get Involved In The Fight 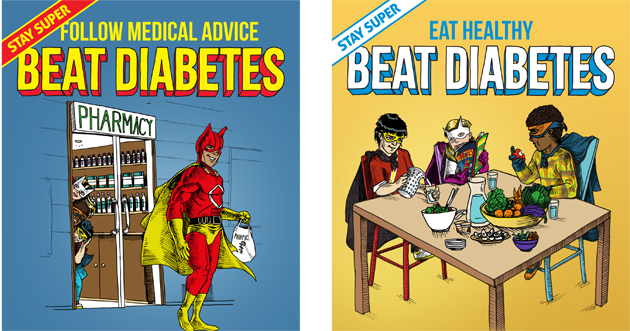 Every year, the World Health Organization selects a priority area of global public health concern as the theme for World Health Day, which falls on 7 April, the birthday of the Organization.

The theme for World Health Day 2016 will be diabetes, a noncommunicable disease (NCD) directly impacting millions of people of globally, mostly in low- and middle-income countries.

Diabetes is a chronic, metabolic disease characterized by elevated levels of blood glucose which may over time lead to serious damage to the heart, blood vessels, eyes, kidneys, and nerves. The prevalence of diabetes has been steadily increasing in the past few decades, in particular in low- and middle-income countries. Knowledge exists to reverse this trend through targeted prevention and appropriate care.

Diabetes and its complications bring about substantial economic loss to people with diabetes and their families, and to health systems and national economies through direct medical costs and loss of work and wages.

Working to prevent, detect and treat diabetes is also critical to development. Within the 2030 Agenda for Sustainable Development, Governments have set an ambitious target to reduce premature mortality from NCDs – including diabetes – by one third; achieve universal health coverage; and provide access to affordable essential medicines – all by 2030.

Diabetes is one of four priority NCDs targeted by world leaders in the 2011 Political Declaration on the Prevention and Control of NCDs and the SDGs 2016-2030. The Global Action Plan for the Prevention and Control of NCDs 2013-2020 provides a roadmap and menu of policy options to attain nine voluntary global targets, including an additional target to halt the rise in diabetes and obesity by 2025.

Diabetes matters to many
Diabetes, therefore, is an issue relevant to people around the world, as well as multiple stakeholders, including government, civil society, the private sector, and intergovernmental agencies.

While every country and community is at a different stage in addressing its diabetes challenge, there are a number of activities that could be considered at national and local level on World Health Day 2016 to help achieve its objectives to increase awareness and trigger a set of actions to tackle diabetes.

The number of people living with diabetes has almost quadrupled since 1980 to 422 million adults, with most living in developing countries. Factors driving this dramatic rise include overweight and obesity, WHO announced ahead of World Health Day.

WHO is marking its annual World Health Day (7 April), which celebrates the Organization’s founding in 1948, by issuing a call for action on diabetes. In its first “Global report on diabetes”, WHO highlights the need to step up prevention and treatment of the disease.

“If we are to make any headway in halting the rise in diabetes, we need to rethink our daily lives: to eat healthily, be physically active, and avoid excessive weight gain,” says Dr Margaret Chan, WHO Director-General. “Even in the poorest settings, governments must ensure that people are able to make these healthy choices and that health systems are able to diagnose and treat people with diabetes.”

Diabetes is a chronic, progressive noncommunicable disease (NCD) characterized by elevated levels of blood glucose (blood sugar). It occurs either when the pancreas does not produce enough of the insulin hormone, which regulates blood sugar, or when the body cannot effectively use the insulin it produces.

These include meeting Sustainable Development Goal (SDG) target 3.4, which calls for reducing premature death from NCDs, including diabetes, by 30% by 2030. Governments have also committed to achieving 4 time-bound national commitments set out in the 2014 UN General Assembly “Outcome Document on Noncommunicable Diseases”, and attaining the 9 global targets laid out in the WHO “Global Action Plan for the Prevention and Control of NCDs”, which include halting the rise in diabetes and obesity.

“Around 100 years after the insulin hormone was discovered, the “Global report on diabetes” shows that essential diabetes medicines and technologies, including insulin, needed for treatment are generally available in only 1 in 3 of the world’s poorest countries,” says Dr Etienne Krug, Director of WHO’s Department for the Management of NCDs, Disability, Violence and Injury Prevention. “Access to insulin is a matter of life or death for many people with diabetes. Improving access to insulin and NCD medicines in general should be a priority.”

Global efforts are underway to make medicines, including for NCDs, more available and affordable. Commitments from world leaders, including the SDGs, the 2011 “UN Political Declaration on the Prevention and Control of Noncommunicable Diseases”, the 2014 UN General Assembly “Outcome Document on Noncommunicable Diseases”, and the work of the UN Secretary-General’s high-level panel on access to essential medicines are aimed at improving affordability and availability of essential drugs for people living with diabetes.