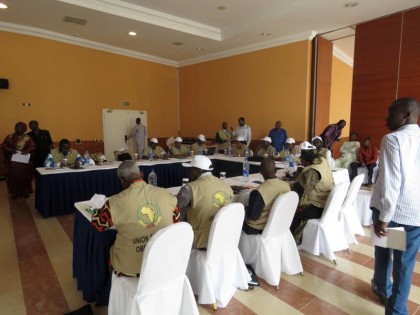 The Observation Mission of the AUEOM arrived in Chad on the 6th of April 2016 at Kempinski hotel N’Djamena Chad. The two days induction process was led by H.E. Dioncounda Traore, transition President of the Republic of Mali and supported by his team of 34 observers from 23 different African Countries.

Speaking at the opening H.E. Dioncounda Traore, Head of Mission thanked the host country for the invitation to the AU to observe the election and added that is within the context of African solidarity, in the same vain the African Union has decided to dispatch the observation mission team to further unite the efforts of democracy.

The Head of mission reiterated that the primary rule of the mission is to observe the election and learn lessons from the electoral process. In addition, he underscored the purpose is to ensure true democracy within the continent. The transition to democracy is a process that takes time; just like the other democratic countries Africa as a continent is transiting into a democratic continent he reckoned.

H.E. Dioncounda Traore concluded by “I admonish all of you observes to carry out your duties in a professional manner knowing that you are impartial and remain objective in the observation process”.

Description: Description: C:\Users\BC\Desktop\IMG_1230.jpgThe observers will be deployed tomorrow the 9th April to 18 of the 22 regions of the Chad Republic. The 18 teams of the AU will be present all throughout the process after undergoing a tedious orientation process from the 7th to the 8th April 2016. The observers were taken carefully through the political and security analysis of the country to facilitate their operations and prepare them for the 10th of April the day of the Presidential election. The AU delegation will observe the situation in the country till the last day of the political campaign, which is Friday 8th April by midnight.

In order to achieve its goal of having an independent, honest, professional and impartial observation based on transparency, integrity, fairness and regularity of the elections, the Mission will meet with various political authorities in the countries such as institutions in charge of elections, political parties in contention, the Ministry of Foreign Affairs and the Constitutional courts in the Republic of Chad.