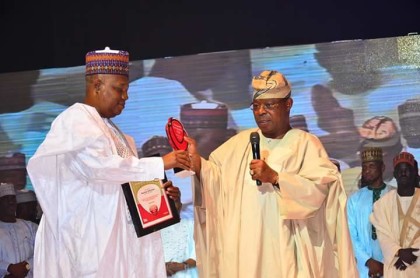 Borno State Governor, Kashim Shettima has demonstrated rare leadership skills and courage in managing the Boko Haram insurgency and for that, he is the most deserving for award as Nigeria’s Governor of the Year, 2015, Edo State Governor, Comrade Adams Oshiomhole has said.

Oshiomhole stated this on Friday night while responding to an award he received from Vanguard Newspapers as one of Nigeria’s Governor of the Year, 2015, which the Newspaper had awarded to four Governors, Kashim Shettima of Borno, Hassan Dankwambo of Gombe, Ibikunle Amosun of Ogun State and Oshiomhole at this year’s edition of Vanguard Personality Awards tagged, “The Torchbearers” which held at Eko Hotel, Victoria Island in Lagos. President Muhammadu Buhari and former President Goodluck Jonathan received ‘Personality of the Year award’ while former Vice President Alex Ekweme received life time achievement award.

“If I was asked to vote among ourselves, to choose one Governor who should be really voted for tonight, l will without any reservation vote for Governor Shettima of Borno State because the truth is that it is quite challenging to manage even in a peaceful environment and each time we hear that they have exploded bomb (they are killing children, they are killing women) we expect to see a Governor who is wallowing himself in pity, joining his people to cry as if there will be no tomorrow but in Governor Shettima, every bomb blast reinforces his determination to fight and defeat the forces of darkness. He has efficiently made a difficult job look so easy‎. We in Edo state in Edo state admire Governor Shettima so much and as I have said if I were to vote, I will add my honor to his own because he has shown that the devil is a liar. I congratulate you, I am happy for you and I am happy for the people of Borno state and we in Edo state are hoping that you prevail” Oshiomhole said.

Speaking further, the Edo Governor recalled, “Around this time last year or a little early than that, Governor Shettima had the courage to speak truth to power, that Government was not doing enough, that insurgents were more armed and even more motivated. He spoke to power when it was dangerous to do so. Each time I see men of courage I feel more reinforced myself, so I congratulate you, Shettima”.

President Buhari, awarded for his resilience in politics, was represented by Minister of Information and Culture, Lai Mohammed, while Jonathan, awarded for political maturity in conceding defeat in the aftermath of the 2015 Presidential elections, was represented by a former Minister ‎of works, Prince Dayo Adeyeye. Other recipients including Governors Shettima, Dankwambo, Amosun, Ekwueme, Jim Ovia of the Zenith were at the event in persons.

Founder and Chairman of Vanguard Newspapers, Uncle Sam Amuka said the company initiated the Personality Awards in 2013 “‎to celebrate exceptional achievers” in various fields with the aim of inspiring other Nigerians to make the country better.