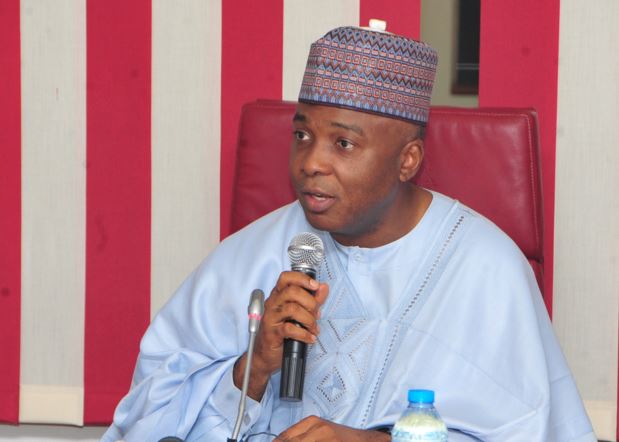 Senate President, Dr. Abubakar Bukola Saraki on Thursday reiterated the commitment of the Senate to the safe return of the Chibok girls abducted two years ago by Boko Haram insurgents and said members of the legislative would not rest until the girls are rescued and reunited with their families.

This was contained in a press release signed by Chief Press Secretary to the Senate President, Sanni Onogu and made available to the media.

Saraki said this when the Women Arise for Change Initiative led by its President, Dr. Joe Okei-Odumakin visited him in Abuja as part of activities to mark the second year anniversary of the kidnap of the Chibok girls and also to present a Guideline on Gender Based Violence (GBV) and young persons in Nigeria to him.

The Senate President also expressed optimism that the efforts at rescuing the Chibok girls is moving towards a positive conclusion.

“I want to assure that the 8th Senate is in total support of your activities and you can take us as partners in this process of reducing Gender Based Violence. The caliber of Senators present at this courtesy call demonstrates our commitment to work with you.

“Today also symbolizes two years in which we had this horrific event of the kidnap of the Chibok girls. So far, as we all recognize, I believe that we are getting closer to see the light at the end of the tunnel.

“Definitely, great achievement has been recorded militarily in the North East. Yes, the job has not been completed, but I believe that we are moving towards more positive end hopefully.

“I want to assure you that none of us would rest until the Chibok girls are safely rescued. We will play our roles to give all the support we can and I think that we must commend our officers and men for having done very well. However, we urge all our security agencies to do more because we can only say you have done very well after the girls are back to their families. Anything else is just an effort and work in progress.

“I think we must be blunt with ourselves that as a country, we have a responsibility to rescue the Chibok girls because the only way we can judge ourselves that truly as a nation we have been able to deliver is to bring the girls back to their families.

“We must do every thing that is necessary to ensure that on our part as a National Assembly, we will play our own role both in advocacy and holding the agencies concerned responsible until that there is positive closure of the abduction case,” he said.

On Gender Based Violence, he said the Senate would work to pass bills and laws that will discourage the menace and reduce the incidence, saying “To us, it is a big no to gender based violence.”

On her part, Dr. Okei-Odumakin, while calling for more encouragement for the military said she is optimistic that the Chibok girls will be rescued and returned home safely to their parents.

She also called on the Senate to make laws that will discourage violence against women and girls as well as discourage discourage those who perpetrate such acts.

According to her, “all of us in unison should kick against the dastardly act to make our environment peaceful. We must ensure that the girl child and women in Nigeria are protected.

“There comes a time in the life of a people that we must stop agonizing and organize. That is the essence of the guidelines on Gender Based Violence and young persons in Nigeria,” she said.