FG To Bring Culture, Tourism Sectors Into Mainstream of Economy – Minister of Information

The Minister, who stated this in Lagos on Sunday at a meeting with Arts, Culture and Tourism Correspondents, said the sectors are among those that have been identified as key to the government’s economic diversification programme. 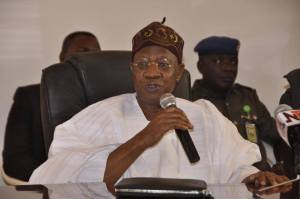 “As you are very much aware, this Administration is diversifying the economy away from oil, which for many years has been the mainstay of our economy. Among the sectors that have been identified as veritable sources of revenue for the nation are the Arts, Culture and Tourism Sectors.

”This is why we in the Ministry of Information and Culture are working hard to move these sectors from the margins to the mainstream, and ensure that the rural poor in particular are factored into the Sector’s architecture,” he said.

Alhaji Mohammed said special attention will be paid to the capacity building of culture and tourism managers in a deliberate effort to revive the nation’s creative arts, boost tourism and create employment for Nigerians, particularly the rural dwellers.

“Working with various local and international partners, including the Tony Elumelu Foundation and the British Council, we are mapping our creative arts, by which we mean pottery, weaving, dyeing, sculpturing, etc, with a view to reviving them massively through capacity building for those involved and the provision of loans. We believe this will not only create hundreds of thousands of jobs, thus keeping our people meaningfully engaged, it will also become money spinners for the economy and stem the rural-urban migration,” he said.

In addition, he said a multi-sectoral approach is critical in order to address the multifaceted challenges facing the sectors, while giving an assurance that the present Administration has mustered the political will to tackle those challenges.

“We are not naive enough to believe that repositioning these critical sectors will be a walk in the park. We do know, for example, that tourism is a multi-sectoral issue that involves easier access to visas, provision of necessary infrastructure like roads, adequate security, etc. This is why we have decided to call a National Summit on Culture and Tourism, which is scheduled for April 27th to 29th 2016 in Abuja, with a view to charting the path forward.

”We are aware that similar efforts have been made in the past, without an appreciable result. The difference this time is our commitment and the different milieu provided by the national imperative to diversify the economy, amidst the crash in the price of oil,” the Minister said.

Alhaji Mohammed therefore solicited the support and cooperation of the media to achieve the goal of repositioning the tourism and culture sectors into the main pillars of the economy because of its potential to generate wealth and create jobs.