About 1,800 bags of 50 kilograms of rice which constitute three trailer loads, are eaten daily by internally disp‎laced persons in different parts of Borno State, Borno Governor, Kashim Shettima revealed on Tuesday in Abuja. 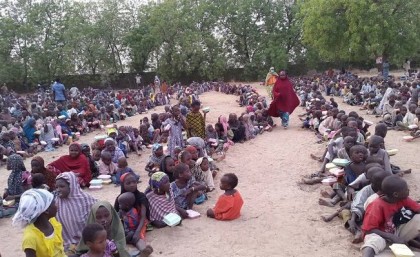 Shettima made the revelation in his keynote address at the ‘first annual dialogue on Rebuilding Peace in Borno State’ organized by a humanitarian advocacy group, AOA Global in collaboration with the Borno State Government which held at Borno room of the Transcorp Hilton Hotel which had Ministers of Health, Professor Isaac Folorunso Adewole, Industry, John Kayode Fayemi, Statistician General of Nigeria, Dr Yemi Kale, the Director of the United States Agency for International Development, the UK Department for International Development, the UNDP, Norwegian government, other foreign and local development partners in attendance.

Shettima took time to highlight what he called food emergency as a result of influx of displaced persons who were trapped by insurgents before they were recently freed by the military.

“‎As we speak, we are battling with a crisis of feeding mass of humanity in Borno. The Military has succeeded in rescuing communities that we trapped due to presence of Boko Haram insurgents on certain routes. This cheering rescue has led to mass exodus of internally displaced persons from these trapped communities to emergency camps we had to establish. In Borno today, about 1,800 bags of 50 kilograms of rice which constitutes three trailers of 600 bags each, is required DAILY to cater for internally displaced persons across the State and this does not include ingredients like tomatoes, vegetable oil, beans to balance carbohydrate, onions, salt and other elements. For our regular camps, a total of 984 bags of rice is consumed daily based on a Data Tracking Matrix of the International Organization on Migration working with the National Emergency Management Agency and the Borno State Emergency Management Agency. This figure of 978 bags is for the camps in Maiduguri and Jere, Dikwa, Bama and Damboa. For Maiduguri and Jere, 787 bags of rice are consumed Daily for the 152,000 displaced persons in 17 camps and two relief points at Madinatu and Muna Garrage where distribution of food items are made to IDPs living outside camps in Maiduguri. For Dikwa which has 75,000 displaced persons, 101 bags are required daily. Bama requires 50 bags daily for 32,000 displaced persons while Damboa requires 40 bags daily. These are as per the Data Tracking Mtarix of the International Organization on Migration. There are areas where interventions are made on bi-weekly basis. In Gwoza for instance, two trucks totaling 1,200 bags of rice are conveyed every two weeks which comes down to 85 bags daily. In Banki, the same 1,200 bags in two trucks are conveyed every two weeks.
At Ngala where we have 7,000 persons in camps and 60,000 living around communities with no source of food, a minimum of 140 bags of 50 kilograms of rice is consumed daily. In Monguno which has 48,000 IDPS from both Monguno and Marte, 60 bags are required daily; in Baga and Kroskawa, 58 bags are required daily for 33,000 IDP’s. In Sabon-Gari, 21,000 IDP’s require 40 bags daily while Nganzai has the least which is 1,300 displaced persons. Beside population, consumption is also dependent on ratio of women and children who consume less than men.

Only yesterday, the International Community of the Red Cross and Red Crescent which has been of unimaginable humanitarian support to Borno, conveyed 33 trucks, each carrying 600 bags of rice, to intervene on feeding and this after an initial 37 trucks donated by the same ICRC have been exhausted. The World Food Programme has been of great help and so are the American Government through the USAID, the United Kingdom through the DFID, the Norwegian government, the UNICEF and other humanitarian organizations” Shettima said.

The Governor revealed that the Federal Government has recently approved the release of 21,000 bags of 50 kilograms of contraband rice, some v‎egetable oil and clothes seized by the Nigerian Customs.

“The Federal Government under President Muhammadu Buhari has just approved the release of 21,000 bags of contraband rice seized by the Nigerian Customs along with vegetable oil and some clothes which we are trying to move from Lagos to Maiduguri this week. I left Maiduguri for Lagos yesterday to supervise the evacuation of the food items because I wanted to be to confront any bottle neck that would be required to fast-track the evacuation. We are in a desperate situation. When crude was over 100 dollars per barrel Borno was receiving about 4.5 billion naira monthly but last month, Borno received 2.6 billion naira as its federal allocation due to the fall in price of crude oil. We had to top seventy million naira from our savings to pay salaries because as a strategy, we have never failed to pay salaries by 26th of every month and we took that decision knowing that Boko Haram insurgents where capitalizing on joblessness to recruit fighters they pay as little as N5,000 to set schools ablaze and spy on soldiers. We realized that failure to pay salaries in a economy that was brought down by war could portend grave danger. Ladies and gentlemen, we have been talking about food crisis and this is aside the monumental infrastructure and economic losses Borno has suffered” the Governor noted.

The Minister of Health, Professor Isaac Folorunso Adewole informed participants that the Federal Government has arrived at a figure of N80 billion required to rebuild health infrastructures in the northeast with Borno expected to benefit more. Minister of Industry, John Kayode Fayemi said his Ministry was going into discussions with Borno on areas of industrial interventions. The Director of the USAID, ‎Mellor said the American Government is currently working with Borno Government to revive agriculture in some parts of the State taking advantage of agricultural machineries imported by the Borno Government. Many speakers called for local and international support in the reconstruction of Borno.

Convener of dialogue and Chief Executive Officer of AOA Global , Dr Ayoade Olatunbosun-Alakija said it was necessary for all and sundry to rally round Borno State towards a rebuilding effort that requires a a billion dollars w is equivalent to N1.9 Trillion.