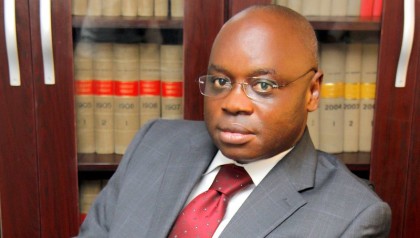 The Economic and Financial Crimes Commission (EFCC) on Friday opened its case against a Senior Advocate of Nigeria (SAN), Dr Joseph Nwobike, before an Igbosere High Court in Lagos.

Nwobike is standing trial before Justice Raliat Adebiyi, on a five-count charge bordering on an attempt to pervert the course of justice and offering gratification to a public official.

He was arraigned on March 9 by the anti-graft agency on allegations that he gave the sums of N750,000 and N300,000 to Justice Yunusa of the Federal High Court.

The commission said the money was to influence the judge to pervert the course of justice.

He denied the charges and was granted bail on self recognition.

At the resumed hearing on Friday, EFCC called two witnesses, one Joseph Oyekunle and Oliver Enwerem.

During examination-in-chief by the prosecutor, Mr Rotimi Oyedepo, Oyekunle said that on March 19, 2015, there was a debit of N750,000 from Nwobike’s account in favour of Justice Mohammed Yinusa.
Oyekunle added that on April 1, 2015, “debit transactions of N1.5 million in four places were made on the same day in Manager’s Cheques into other accounts.”

During the cross examination, Oyekunle said that some bank documents revealed that the third and fourth transfers of N1.5 million were made to one Seni Ibiwoye.

He also admitted that he never operated the accused account and did not know the charge against him.

On his part, Enwerem testified that there were several transfers to different accounts by the defendant’s company.

The case was adjourned till May 12 for continuation of trial. (NAN)