The Head of Civil Service of the Federation, Mrs Winifred Oyo-Ita, has said that efforts are on to resuscitate the Federal Civil Service Club to make it a befitting environment for civil servants. 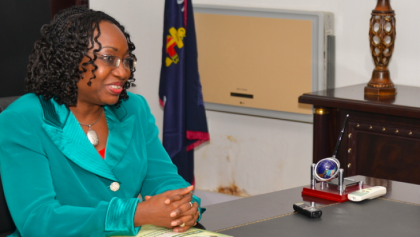 Winifred Oyo-Ita
HoS of The Federation

Oyo-Ita made the statement in Abuja on Sunday during an interview with the News Agency of Nigeria (NAN) after she inspected the facility.

She said it had become necessary to revive the club which was established 16 years ago under a former Secretary to the Government of the Federation, Dr Gidado Idiris.

The head of service said there was a need to resuscitate the club having seen the type of facilities on ground.

“See the land alone underutilized in this choice area of Mabushi, which is of extremely high value.”

“I will not allow this type of investment to rot away just like that.

“A committee has been set up under the chairmanship of the permanent secretary of the Common Services Office to come up with recommendations on how to rehabilitate the club.”

“We have seen some unknown tenants here, some people we do not know have encroached upon land,” she said.

Oyo-Ita said her office would invite legal authorities to investigate the issue of encroachment, adding that an official report would be made to the police on the matter.

She said the service would not take laws into its hands but added that she would not allow the property to be taken away by persons who wanted to deny civil servants their place of relaxation.

Mr Yemi Adelakun, Permanent Secretary, Office of the Head of Civil Service, said the move to recover and renovate the place showed how the head of service valued the interest of civil servants.

“Our head of service is a welfare person who wants to create a recreational park so that the civil servants will have a place to meet and have a quiet moment.”

“The occupants of the land presently are encroaching because there is no official handover of the land to anybody.

“In fact, the head of service is not aware that some people are on the land and not even I, the permanent secretary, is aware,” Adelakun said.

He added: “even if the property was leased out, there should not be a permanent structure on the land just as has been observed.

He, however, advised the public to always follow due process while trying to acquire property.

Adelakun stressed that the Office of the Head of Service had not leased out its property to anybody.