NFF on Monday upheld the sanction imposed on Giwa FC by the League Management Company (LMC). 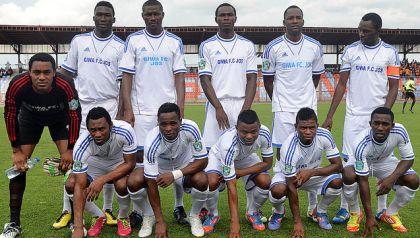 It said in a communique signed by the NFF’s spokesperson, Ademola Olajire, that the sanctions imposed by the LMC was in line with the rules and regulations guiding its operation.

Giwa’s sanction came on the heels of the club’s Match Day 12 fixture in the 2015/2016 Nigeria Professional Football League (NPFL) played on April 17 in Jos.

NFF in the statement said it upheld the LMC sanction at the meeting of its Disciplinary Board on April 25 in Abuja.

“After a careful observation of all documentary evidence presented before it, the NFF Disciplinary Board hereby rules as follows.”

“NFF Disciplinary Board also added additional sanctions to GIWA FC for further violating sections of the FIFA Code of Ethics, FIFA Disciplinary Code and the LMC Rules and Regulations.”

The News Agency of Nigeria reports that the new sanctions included fine, suspension of some officials, and banishment from the team’s home ground to Ilorin.

“A fine of N5 million for the discontinuation of the match and that the match shall be continued behind closed doors at the National Stadium, Abuja on Wednesday, 27th April, 2016, from the point of disruption (i.e. from the 74th minute).”

“The result of the match at the point of disruption shall stand (i.e. 0-1); Due to the disturbances as stated in paragraph 2 above, Giwa FC is banned from the Rwang Pam Stadium.”

“This shall be for its next three home matches, which shall be played at the Ilorin Township Stadium, Ilorin, Kwara State,” it said.

NFF further stated that, “ due to the persistent nature of such disturbances by supporters of Giwa FC in the match under review, Giwa FC shall play its remaining home matches behind closed doors.

“Supporters of the Club are banned from all League match venues for the remainder of the season; provided that the LMC reserves the right to lift the ban at any time.”

“This would be on the condition of receipt of firm and satisfactory assurance and commitment (including training and orientation seminar for supporters of the Club under the supervision of the LMC).”

“Giwa FC is expected to guarantee responsible behaviour and orderly conduct of supporters of the Club,” the statement said.

The NFF further imposed a “fine of N750,000 for failure to control their players and officials.

“Giwa FC is required to ensure, within the next seven days, that in addition to the apprehension of one Sodiq Goje, his co-culprit identified as one Mustapha Apiya is also apprehended and prosecuted.

“This was for assaulting the Referee, failure of which a fine of N25,000 per day shall accrue, until such time the offender is apprehended and charged to court.”

“For acts and conduct capable of bringing the game to disrepute, a suspended two-point deduction is imposed on Giwa FC subject to any subsequent incidents of disturbances by supporters of the Club in breach of the League Rules for the remainder of the season,” it said.

NFF also berated the actions of Yakubu Daylup, administrator of the Club, and David King, the media officer of the team.

“This act is a breach of Art. 53 of the FIFA Disciplinary Code hence; both officials of the club are hereby suspended from all football related activities for a period of twelve (12) months.”

“Upon expiration of twelve months they are to write an official letter to be of good conduct and submit same to the NFF before they can be allowed to participate in any football related activity.”

“This decision is in line with Art. 59.1 of FIFA Code of Ethics,” the statement said.