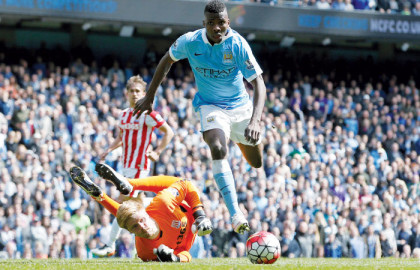 In Manchester the spotlight on one of the hottest young talents falls on the red side of the city in Marcus Rashford.

The Manchester United teenager has lit up their season with his goalscoring exploits – netting seven goals in 14 appearances since making his debut in February.

However, their ‘noisy neighbours’ Manchester City can boast an equally as devastating young striker in Kelechi Iheanacho.

The 19-year-old is quietly blossoming into a clinical finisher at City, and this was highlighted by his two goals in their 4-0 Premier League win over Stoke on Saturday.

That double took his overall tally to 11 in the season and a stat that sees him crowned as Europe’s deadliest marksman.

Iheanacho can lay claim to being the most prolific goalscorer in Europe’s top five league based on minutes played. 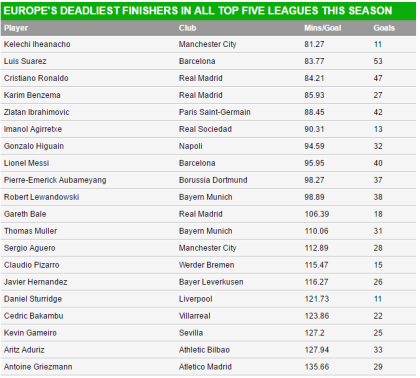 His minute-to-goal ratio stands at 81.27 – a figure that surpasses illustrious forwards such Lionel Messi, Robert Lewandowski and Cristiano Ronaldo.

Based on players having scored 10 goals or more this term in all competitions, Iheanacho’s nearest challenger is Barcelona forward Luis Suarez. The 29-year-old has scored 53 times at a minute-to-goal ratio of 83.77.

Real Madrid duo Ronaldo (47 goals) and Karim Benzema (27) sit third and fourth respectively in this list at 84.21 and 85.93 respectively.

Paris Saint-Germain talisman Zlatan Ibrahimovic rounds out the top five with his 42 goals coming every 88.45 minutes.

Messi is 8th in this list with his 40 goals for Barcelona coming every 95.95 minutes.

Aside from Iheanacho, only City team-mate Sergio Aguero and Liverpool striker Daniel Sturridge are from the Premier League inside the top 20.

Real Madrid visit the Etihad for the first leg of City’s first Champions League semi-final, offering Iheanacho the chance to challenge himself against the likes of Ronaldo, Benzema and Bale.

‘I think I should dream about that because it’s a great team to dream about,’ he said. ‘It would be a dream come true to play against them.

‘Ronaldo and Messi are the greatest players on the planet so I think playing against them is a big thing to anyone. It would be a big thing to me if I play against him on Tuesday.’

If the young Nigerian does feature on Tuesday then Real’s defence have been warned.