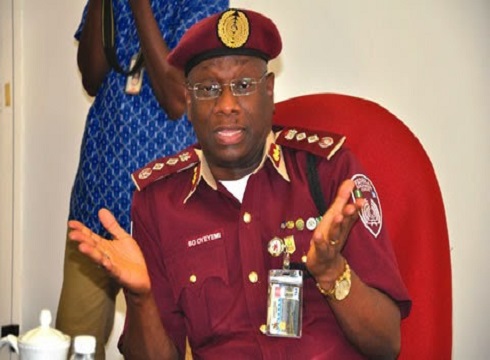 The Federal Road Safety Commission (FRSC) has said that vehicle number plates bearing `Peace Ambassador’ are illegal.
Mr Boboye Oyeyemi, the Corps Marshal of the commission, disclosed this on Thursday while declaring open a workshop for Motor Licencing Authority Officials.

“We have ordered that any Peace Ambassador number plate seen on a vehicle, such vehicle should be impounded because it is a fake number plate.

“The number plates do not go through the normal registration process, so anybody that has such a number plate should know that it is an illegal one; it is not authorised; it is fake and it is criminal,“ Oyeyemi said.

He said the FRSC had discovered that such number plates were sold at exorbitant fees to prominent persons to the tune of between N150, 000 and N200,000.

The corps marshal also said that the commission had in the last three years observed some illegal number plates on the nation’s high ways.

He urged Motor Licencing Officers not to attempt to register such vehicles because FRSC did not produce the plates.

He said that Lagos State that also had its own Number Plate Plant had confirmed that it did not produce such plates.

“I want to advise all the states and the FCT not to encourage this, the corps has not produced any number plate for anybody; the corps is not selling plates directly to the public.

“It is a road task and the corps has respected the constitutional role of the states as regards the road task administration, we have not authorised anybody nor produced any fancy number plates for anybody,’’ Oyeyemi said.

He also frowned at the practice where some number plates belonging to some states were being sold in other states.

He said it was wrong for number plates for one state to be carried with its vehicle licence to another state for registration, and advised those involved to desist from such act.

The corps marshal called for a harmonious working relationship among all traffic agencies – the FRSC, VIO, and the Driving Schools to work as a team to achieve road safety in the country.

He said the use of data for planning, research, policy formulation and recovery of stolen vehicles was very critical.