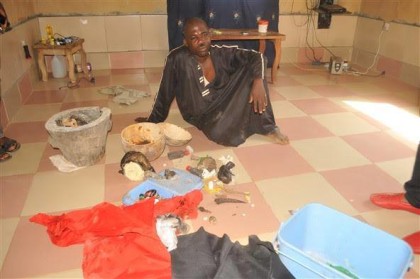 The pastor who is a founder of the CAC “Dagunro” was arrested on Wednesday evening following a tip-off that he was suspected to have buried something suspected to be human head inside his church.

The men of NSCDC quickly swung into action, went straight to the church and he was asked to dig some spots inside the Church where various items suspected to be charms such as cow head, pigeon head tied with colanut, big clay pot wrapped with white clothes and other numerous fetish items were exhumed from the ground both at the entrance and inside the church.

While briefing the journalists at the NSCDC Command headquarters in Alagbaka Akure on Thursday evening, the state commandant of the corps, Mr. Fasiu Adeyinka said his men swung into action on Thursday afternoon following a tip-off that the self acclaimed pastor was suspected to have buried some items inside the Church and his officers were able to make these shocking discoveries about the pastor.

The commandant said investigation is still on-going to unravel the pastor’s act. Mr. Adeyinka charged the good people of the state to be very vigilant and always give useful information to the corps in order to nip all forms of criminality in the state in the bud so that the state can be a safer place to live.