Italian Prime Minister, Matteo Renzi, said on Friday that he had empowered the police to fight against illegal immigration in the Mediterranean Sea. 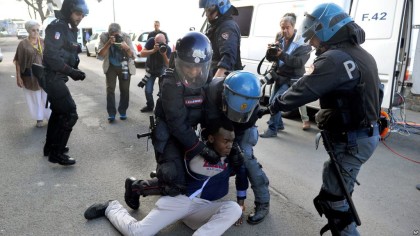 He told journalists that police should fight against the illegal immigrants particularly by taking the fingerprints of all migrants in the high sea before they arrive on Italian soil.

Renzi said that the measure would ensure that the genuine refugees, economic migrants and the smugglers can be identified.

“Since the beginning of this year, the Italian police have arrested 1,002 smugglers”.

“Since the fall of Muammar Gaddafi, collaboration between the Libyan and Italian justices was suspended, as 90 per cent of the illegal trafficking originates from Libya”.

“We identified the criminal gang chiefs, but we are unable to arrest them because they reside in Libya”, Renzi said.

He cited Ethiopian Ghermay Ermias and Eritrean Medhanie Yehdego Mered as the identified smugglers during the shipwreck that claimed the lives of 366 persons off the Lampedusa coasts.

Two well-known traffickers, Tunisian Mohamed Malék, 27, and Syrian, Mahamud Bikhut, 25, who were accused of aiding illegal immigration, will appear before Italian courts for the shipwreck that left 700 dead on April 18, 2015.

Italian Justice has sentenced 70 adults to terms between five and 10 years for their involvement in illegal immigration and human trafficking.

Forty five others will serve long sentences for crimes related to violence and manslaughter.