As Nigerian troops in the north eastern part of the country continue their offensive against insurgency, under the auspices of Operation LAFIYA DOLE, the troops have been working round the clock to clear the remnants of Boko Haram terrorists in their hideouts. 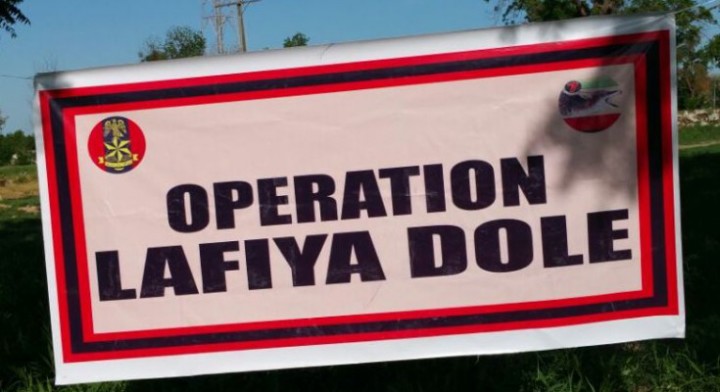 This was made known to the media in a statement issued by Acting Director Army Public Relations, Colonel Sani Kukasheka Usman on Wednesday.

He said that consequently, various formations and units have embarked on clearance operations that ranged from outright offensive operations, to raids, cordon and search operations and patrols.

Col Usman recalled that a soldier was wounded during an offensive operation by 21 Brigade yesterday, we regret to inform you that he died this morning. May his soul rest in peace, Amen.

According to him, the 22 Brigade on its part, has conducted clearance operations in which it cleared 4 towns and villages of Boko Haram terrorists.

He said that in the process, they killed 3 Boko Haram terrorists, while 9 of them that  hid in fox holes and dug outs were found out and captured.

“Yesterday afternoon, troops of 3 Battalion convoy from Dikwa to Gamboru Ngala unknowingly stepped on series of Improvised Explosive Devices (IEDs) buried by suspected Boko Haram terrorists between Gajibo and Logomani. Sadly, we lost a soldier, while 4 other soldiers and a civilian vigilante sustained injuries.

“The body of the late gallant soldier and those injured have since evacuated.” He said.

In a similar manner,he said the troops of 121 Task Force Battalion on blocking position  near Gibiye, intercepted fleeing Boko Haram terrorists in pick up van and on 3 motorcycles. They engaged them,  killing 3 terrorists and recovered the van and the motorcycles.

Usman added that, in a related development, as part of signs that people are now safe and comfortable with the efforts of the military in ensuring security in the north east, 26 vehicles conveying 398 returnee internally displaced persons and residents of Gwoza arrived Gwoza in preparations for resettlement in their various communities on Monday.

He said that the troops of 26 Task Force Brigade also ambushed Boko Haram terrorists yesterday at Uvaha, killing some of them and wounding others. The troops recovered a bicycle, 1 bag of   baobab powder, submersible pump and 1 bag of carbide suspected to be for IED making.

He also said the troops of 114 Task  Force Battalion also rescued 72 persons held hostage by the terrorists in Jaje and Mayor Ali.

“In all locations, the troops morale and fighting spirit remains very high, more so as the Chief of Defence Staff as well as the Chief of Army Staff and the Chief of Air Staff have visited the theatre of operation on Monday 2nd May 2016.” Col. Usman said.