The Minister of Information and Culture, Alhaji Lai Mohammed, has hailed the nation’s founding fathers for laying the foundation for the development of the country, saying their legacies will continue to remain an inspiration. 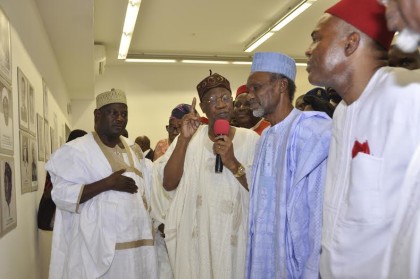 The Minister made the remarks in Abuja on Saturday while declaring open a historical photographic exhibition with the theme “Political Development of Nigeria 1960-2016: The Change Mantra”.

Alhaji Mohammed noted that through creative ideas, dedication and patriotism, the political leaders of the various defunct regions were able to harness agriculture to drive the development of the country.

“It was the strong personalities, the strong characters at the helm of affairs in each of the regions that made it possible for the groundnut pyramids of Kano and that made it possible for Cocoa House to be built from Cocoa. Free education was pioneered in the West via agriculture, coal was highly developed in the East, rubber and palm products you could find in the East. It was a tribute to the characters of these leaders,” he remarked.

The Minister, however, urged the nation not to lose hope as the country is now witnessing another round of committed, focused and patriotic leadership that will return Nigeria to its past glories.

He equally appealed to the people to change their perception of arts and creativity, which have huge potentials to become a viable economy that can create employment, especially in the rural areas where people are constrained by lack of education and finance.

“Unfortunately, the perception of arts and culture in Nigeria is very low and this we needed to change because any nation that forgets its history is bound to make little or no progress at all,” Alhaji Mohammed said.

Segun Adeyemi SA to Minister of Information said the exhibition was attended by the Chief Justice of Nigeria, Justice Mahmud Mohammed, Minister of Science and Technology, Dr. Ogbonnaya Onu, Minister of State for Niger Delta, Mr. Claudius Daramola and members of the diplomatic corps.