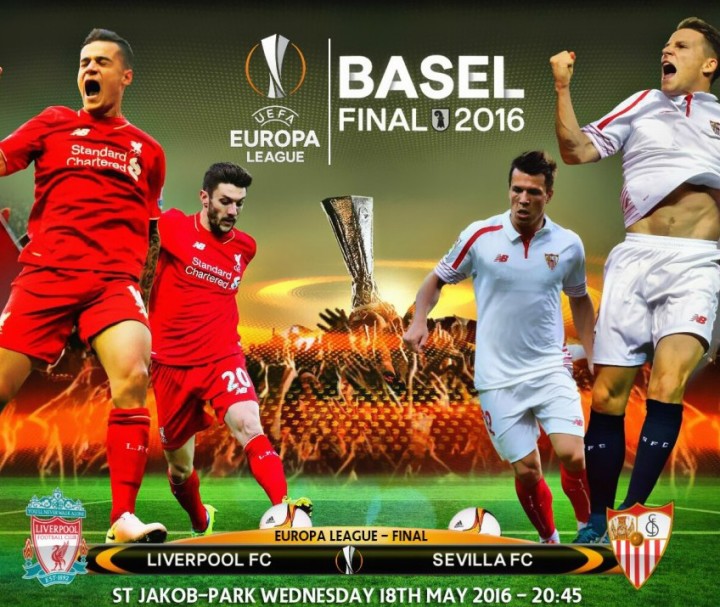 Previous meetings
• The sides are meeting for the first time in UEFA competition.

• Liverpool’s 34 UEFA games against Spanish opposition have ended W14 D10 L10 (W5 D6 L5 at Anfield – W7 D4 L5 in Spain). Those matches include two final victories on neutral territory: 1-0 against Real Madrid CF in the 1981 European Champion Clubs’ Cup in Paris and 5-4 after extra time against Deportivo Alavés in the 2001 UEFA Cup in Dortmund.

• They landed the UEFA Cup/UEFA Europa League for a record fourth time last term – and a second time in succession. No team have won three consecutive editions of a major UEFA competition since FC Bayern München’s third straight European Champion Clubs’ Cup in 1975/76.

• Neither side have lost a UEFA Cup/UEFA Europa League final, though it took penalties to settle two of Sevilla’s deciders.

• In terms of continental pedigree, Liverpool eclipse Sevilla: they have won the European Cup five times to Sevilla’s none, and also have the upper hand in terms of UEFA Super Cups (3-1).

• Liverpool’s last UEFA Cup win, in 2001, came against Spanish opponents, a remarkable 5-4 extra-time win against Alavés in Dortmund. At that time, Sevilla had never won a European competition, and were plying their trade in Spain’s second tier.

Sevilla’s 2015 glory
• Victory for Sevilla would be a tenth UEFA Cup/UEFA Europa League win for Spain, lifting them above Italy as the competition’s most successful nation. Liverpool are bidding for England’s eighth triumph.

• No members of the current Liverpool squad have won a UEFA competition with the club; no current Sevilla player has appeared in more than two of the club’s four final wins in this competition.

• Sevilla will be bidding to become the third club to have won the UEFA Europa League after transferring from the UEFA Champions League group stage after Club Atlético de Madrid (2010) and Chelsea FC (2013).

• José Antonio Reyes appeared in Atlético’s final victory in 2010 and Sevilla’s wins in 2014 and 2015, so could become the first player to appear in four final wins. He also featured in the group stage during Atlético’s triumphant 2011/12 campaign.

• Sevilla’s record in eight games since transferring across from the UEFA Champions League group stage is W4 D2 L2.

• In terms of average goals scored per game in this season’s UEFA Europa League, Sevilla are 1.75–1.29 up against Liverpool, but they have conceded at a rate of 0.88 goals per match to Liverpool’s 0.71.

• A Sevilla victory in the final would equal Villarreal’s record of 27 UEFA Europa League match wins.
Swiss connections
• The journey from Liverpool to Basel is around 990km; Sevilla’s journey to the city is a little longer – not far off 1,600km.

• Liverpool have played twice at St. Jakob-Park and have yet to win; they drew 3-3 with FC Basel 1893 in a 2002/03 UEFA Champions League first group stage game, and lost 1-0 in the group stage of the 2014/15 competition. Current squad members Simon Mignolet, Dejan Lovren, Philippe Coutinho, Jordan Henderson and Martin Škrtel all started that match, while Adam Lallana came on as a substitute. Kolo Touré, Alberto Moreno and Lucas Leiva were unused subs.

• Sevilla’s only previous trip to Basel came in this season’s UEFA Europa League, where they drew 0-0 at St. Jakob-Park in the round of 16.

• Kevin Gameiro has scored seven goals in the 2015/16 UEFA Europa League – exactly half Sevilla’s tally in this season’s competition. A hat-trick in the final would take him level with Athletic Club’s ten-goal Aritz Aduriz as the competition’s top scorer this season.

• Gameiro goes into the final having scored in each of his previous three UEFA Europa League games.

• Sevilla’s Daniel Carriço has played more UEFA Europa League games (group stage to final) than any other player, 53 in total. No other player has made more than 50 appearances in the competition since its inception in 2009/10.

• Carriço played in England with Reading FC in 2013; one of his three appearances for the club was a 0-0 home draw against Liverpool in April 2013.

• Sevilla midfielder Steven N’Zonzi played in England from 2009–15, with Blackburn Rovers FC and then Stoke City FC. His record in 11 meetings with Liverpool was W2 D3 L6, but he scored in his most recent encounter – a 6-1 win for the Potters on 24 May 2015.

• Liverpool’s Philippe Coutinho had a loan spell in Spain with RCD Espanyol in 2012; he scored in a 1-1 draw against Sevilla in his final game for the club, on 13 May 2012.

• Liverpool goalkeeper Simon Mignolet has played in all 1,260 minutes of Liverpool’s campaign, the most minutes of any player to have reached this season’s final.

• Liverpool’s Divock Origi was a trainee at LOSC Lille while Sevilla defender Adil Rami was starring for the first team.

• Sevilla’s Ukraine winger Yevhen Konoplyanka joined from Dnipro Dnipropetrovsk after their defeat in last season’s UEFA Europa League final. He could thus be the first player to appear in successive finals with different teams since Radamel Falcao won the UEFA Europa League with FC Porto (2011) and Atlético (2012).

The coaches
• Jürgen Klopp, 48, replaced Brendan Rodgers as Liverpool manager last October. His Dortmund outfit won the Bundesliga in 2010/11, scooped a double the next campaign and lost to FC Bayern München in the 2013 UEFA Champions League final.

• Klopp faced Sevilla with both 1. FSV Mainz 05 and Dortmund; his Mainz side drew 0-0 at home and lost 2-0 away to Sevilla in the first round of the 2005/06 UEFA Cup – a competition Sevilla went on to win. Then, in the 2010/11 UEFA Europa League group stage, his Dortmund team lost 1-0 at home and drew 2-2 in Sevilla against a side coached by Gregorio Manzano.

• Unai Emery, 44, oversaw Sevilla’s successes in the last two editions of the UEFA Europa League, having assumed control in January 2013. The one-time midfielder made his name during a four-year tenure at Valencia and briefly coached Spartak Moskva in 2012.

• Emery has coached in 58 UEFA Europa League games – ten more than any other coach. The semi-final decider against Shakhtar was his 100th game in charge in UEFA competition.